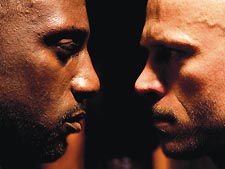 A GOOD RULE of thumb when you're told to ”expect the unexpected,” is to take it with a grain of salt.

With those clichés out of the way, the films that make up the shorts program ”Expect the Unexpected” involve varying degrees of surprise and success.

) starts with the aftermath of what seems to be a hate crime — a man in skinhead-like garb lies bloodied on the ground, while his alleged victim, a young black man, huddles against a wall. Told in reverse, the film effectively delves into a morass of racism and homophobia.

) uncovers something unpleasant, but this time through a funny-at-first moment when a well-dressed businessman is approached on the street by a woman who recognizes him: ”You're that famous gay guy.” His protestations of mistaken identity spiral to a deserved conclusion.

Probably one of the most disturbing films in this year's festival, Bugcrush (

) focuses on gay teen sexuality in a way that feels less like Eating Out and more like River's Edge. Small-town gay boy Ben finds himself with a crush on new-kid-in-town Grant. A classic juvenile delinquent, Grant is naturally hot and compelling, although Ben's best friend and fag hag warns him, ”You're going to get your ass kicked by a bunch of tweaker fucking freaks.” But it's not gay bashing that Ben has to worry about. It's something a lot worse and just all around creepy as hell.

You're not going to see this one coming, and you won't forget it when it does.

) is a story about a Internet-savvy bear and his online relationship with the narrator. It quickly becomes apparent that the setup is actually for a joke, the punch line of which you'll see coming from a mile away.

), an expectant French woman fantasizes about the clandestine — and extremely hot — gay sex her husband is having on the side. One of his sexual fantasies goes horribly wrong (always remember that you can't say a safe word when your mouth is stuffed with sock). Then the wife tries to bring all three of them together. And then everything gets very, very French.

Supposedly, A Funny Thing Happened on the Way to the Funeral (

), which details a priest taking a confession about gay sex from a teenage boy, is so totally predictable you should schedule any bathroom breaks during its run time — you won't miss anything.

), though, shouldn't be missed, mostly because the exuberant and totally uninhibited performance by a bear (the gay kind, not the wild kingdom kind) as he gets himself ready in the morning while listening to the radio is a gem that will make everyone smile as they recognize a little bit of themselves on-screen. — SB