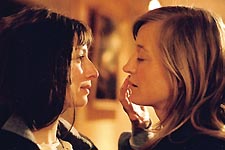 WHEN CHEYENNE LOSES her job and ultimately runs out of unemployment checks, she can’t bear to take help from her lover, Sonia, to keep her apartment. She rebels against the capitalist machine she perceives as being at the heart of both France’s economic downturn and her own troubles, ultimately deciding to move out to the countryside and live off the grid.

Sonia can’t stand to watch helplessly as Cheyenne disappears down a hole of despair. She breaks with Cheyenne and tries to forget her by sleeping around a bit, first with Pierre — a likeable radical with a cheerful outlook who just wants someone to love — and then with Beatrice — a financially successful and studly lesbian with a dour outlook who wants to make Sonia love her by making her suffer. Predictably, Sonia can’t stop longing for Cheyenne, for despite their star-crossed economic and political views, Sonia and Cheyenne had something that apparently won’t let either one of them go. 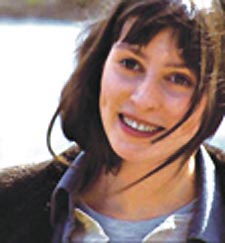 Director Valerie Minetto attains a certain melancholic sweetness with Looking for Cheyenne that seeps into the cinematography, the music, and the very frames of each scene. It’s even reflected in the sweet but sad smile of Aurelia Pettit as Sonia, who convinces us that it is possible to be heartbroken but remain alive and vitally engaged with the world.

There are a few overly ponderous moments, particularly with some unnecessary introductory voiceovers at the start, that detract from the overall quality of the film. However, Looking for Cheyenne‘s evocative photography and gifted acting make these small errors forgivable. After all, who does love and heartbreak better than the French? — NL