By Randy Shulman on October 19, 2006 @RandyShulman 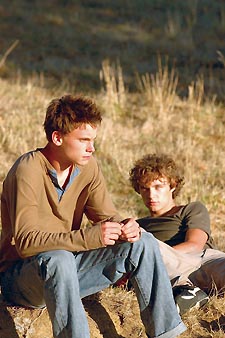 HOW MUCH YOU enjoy A Summer Day largely depends on two things:

2. Your appreciation of gorgeous young French men and their seeming aversion to clothing, shirts in particular.

Sebastien and Mickael are inseparable best friends, and share such great affection for one another, they think nothing of mock-humping one another in public. They don’t seem to have actually consummated their possible hidden desires for one another, but any hopes of us seeing them bed down are rapidly dashed after Mickael falls victim to a horrible accident, leaving Sebastien in a state of gloom, his small French town in upheaval, and its mayor in the throes of a scandal surrounding the municipal football field.

Quick! Someone call Gil Grissom! He’ll sort this out!

The abrupt turn in the story puts the narrative on a different path, as the grieving Sebastien seeks a replacement in his life for the void left by Mickael’s untimely demise. But the drama, directed by Franck Guerin, dries up, leaving in its place dust. A Summer Day is insufferably slow. You could take a dozen bathroom breaks and not miss a thing.

Things aren’t helped much by Baptiste Bertin’s Sebastien. Bertin isn’t just a piece of eye-candy — he’s the entire store. But his good looks don’t match his acting abilities, which primarily consist of two modes: morose and extra-strength morose. Bertin is so expressionless, it’s as though he glimpsed Medusa’s head prior to filming and turned to stone.

The script is a soupcon of clichés: ”A child who loses his parents is an orphan,” says Mickael’s mother. ”But what is a mother who loses her child?” (Now, there’s a question for Jeopardy.) Later, the wife of the town’s mayor, who is under the strain of an investigation surrounding the ascendant, remarks, ”Sometimes a shock can be liberating.”

Except in the case where a shock carries no voltage. Which that pretty much sums up A Summer Day: It’s a dead outlet. — RS