FROM THE GET-GO, we know that anti-hero Ottar is both a great soccer player and publicity whore. Within the first minutes of Eleven Men Out, Ottar is telling a sports journalist — as well as his teammates, father and son, that he’s gay. Why? So he can get his story moved from the back of this particular reporter’s magazine to the front page. No wonder his adolescent son thinks he’s selfish.

From here, the stark backdrop of Iceland serves as good accompaniment to an equally stark comedy, wherein the subtitles become redundant once you’ve read ”bitch,” ”cunt” or ”faggot” for about the 50th time. As a drama, Eleven Men Out fails in that the characters are awfully two-dimensional. Only the son, Maggi, seems to have genuine depth. As a comedy, the funniest bit seems largely unintentional: In rural Iceland, site of an away-game for Ottar and his new, gay soccer team — the ”straight team” kicked him off — Maggi meets a local Goth girl with whom he discusses his outed dad. She admits, ”We’ve got a gay in the village.” 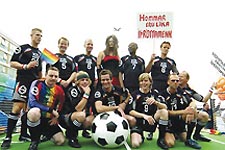 While one must trust that the Icelandic filmmakers know more about their country’s mores, it does seem odd that the self-outed Ottar should face so much opposition in a country where homosexuality has been legal for more than 60 years. Same-sex civil unions have been on the books for decade.

The rockin’ soundtrack will likely leave one thinking that while this Atlantic island nation has steadily been making stellar contributions on the music scene, Icelandic filmmaking may have a way to go. One of the film’s few highlights is hearing the dance version of gay anthem ”I Am What I Am” in Icelandic, which accompanies what seems to be actual Reykjavik Gay Pride footage. And what a wacky coincidence that everyone realizes at the last minute that Ottar’s new gay team will be playing his old team the same day as the pride festival. It’s a plot crafted with a bludgeon. — WOB