By Randy Shulman on October 21, 2006 @RandyShulman 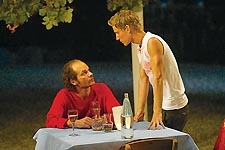 IN HOLIDAY MAKERS, a busload of vacationers spending a week at a seaside resort are transformed by their time together. It's by and large a romantic comedy, filled with quirky characters and messy entanglements, but the film, based on a popular Czech novel, has a fresh, open-aired feel, acted by a superlative ensemble and directed with easygoing grace by Jiri Vejdelek.

Couched within the various narrative threads — a homely middle-aged girl, on holiday with her squabbling folks, finds her soul mate; a pair of buxom young friends spar for the affections of the hunky lifeguard, betraying one another in the process — resides a gay subplot that is one-part maudlin, one-part endearing. It's peripheral to the action, but it has its place in the overall scheme. A secondary subplot finds the prepubescent, impressionable son of a homophobic family wondering if he has gay tendencies. His burning experimentation with Tiger Balm is one of the film's funnier moments.

Bit by bit we learn the stories and secrets behind each of the characters as the film congeals in a marvelous final night for all.

This will be the second time the film has been shown in the U.S. — the Tribeca Film Festival was its first — and those cinephiles who enjoy a good story, told with humor, heart and smarts, will take enormous pleasure in this Holiday. — RS