At 18, Christopher Barnhill wasn’t necessarily going through a “tough time” when he started hanging out at the Sexual Minority Youth Assistance League’s after-school Youth Center on Capitol Hill. Barnhill, a Northwest D.C. resident, wasn’t sure what he wanted to do with his life then, either. But attending the Youth Center three days a week helped answer that question.

“You go there with your problems and come out a new person,” Barnhill says. “It changed me, because it gave me a sense of direction.”

Barnhill, now 20, discovered that sense of direction while interacting with SMYAL staff members, counselors and other attending peers at the Youth Center, which offers various services at no cost to SMYAL members, including, employment programs, counseling, art workshops and HIV/AIDS-related prevention efforts. 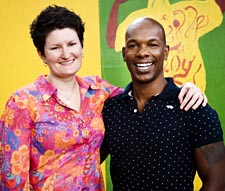 “When you’re around folks who work at a professional setting, and you hear about how they went to college and how they have their degrees, it kind of motivates you to do the same thing.”

Barnhill is already planning what he is going to do after completing course requirements at DeVry University, where he is currently attending. Those plans include earning a master’s degree in business administration and launching his very own not-for-profit organization.

And this Sunday, Nov. 4, SMYAL plays host to what Hill describes as the organization’s “largest single source of general operating funds,” SMYAL’s 10th Annual Fall Brunch, in an effort to raise money for the Youth Center.

“We just try to create a pocket of acceptance where young people can grow, flourish and develop into healthy, productive members of our community,” says Hill. “There are a lot of different challenges that [GLBT] young people face as a result of the fact that this culture does not accept them for who they are.

To help reach this year’s financial goal of $100,000, the brunch also includes a silent auction, featuring the artwork of local artists, tickets to local theaters, gift certificates to restaurants, gym memberships and getaways, including two tickets to Ebony Pyramid’s annual October cruise in the Caribbean.

This year’s keynote speaker, Doug Spearman, a native of Hyattsville, Md., is popular for his role as Chance on Logo’s Noah’s Arc. He joins Maryland Delegate Heather Mizeur (D-Montgomery County), also appearing at the brunch. NBC4’s Wendy Rieger will serve as emcee.

Hill says that for young people, SMYAL’s Youth Center is a place that counteracts the negative messages GLBT youth may hear at their churches, schools or even in their own homes.

“A lot of young people are either forced out of their homes, or end up leaving their homes because the situation becomes unbearable,” she says.

“As we all know, coming out can be a very challenging process at any age. With the coming-out age lowering in recent years, due to increased awareness in the media and in our culture…the age that young people are coming out is while they’re still in high school. Because they’re so financially dependant on their families, and still attending public schools,…they absolutely need some place where they can get support.”

← Previous Story Animus in the Aisles
Next Story → Keeping the Faith