WHEN EVALUATING the quality of a gay film festival, one has to ask: Is there anything more critic-proof than a movie featuring show tunes and penises? 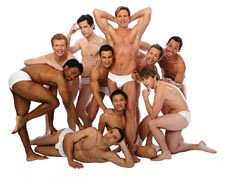 Naked Boys Singing pretty much has its festival box office built into the title. And while it’s not a stunning achievement of cinema by any stretch of the imagination, it does end up being an entertaining, if slight, diversion.

For those who caught the D.C. production of the legendary off-Broadway hit, the film version of Naked Boys offers a different experience — namely better production values and better eye candy. For the most part, the film is a straightforward presentation of a stage show with an audience, although from time to time it veers into odd editing that enhances the feel of it being a ”movie,” but undercuts the experience itself.

Really, this isn’t the type of film where the audience is looking for close-ups. 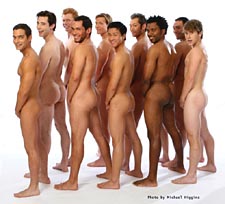 ”Nothin’ But the Radio On” is less successful, as is the fully-clothed ”Robert Mitchum,” a paean to an era when male beauty wasn’t all about muscles — delivered by a muscled cast straight out of a gay gym. The same mixed message undermines ”Muscle Addiction,” a number that suddenly mutates into a scene from Cruising.

Where Naked Boys Singing really falters is when it goes heartfelt. ”Window to Window” is the type of song that became a chestnut the moment it was written. Add in the spectacular creepiness of voyeurism and inane neediness — does it never occur to these guys to say hello when they pass each other on the street? — and it’s just a mess.

But you don’t need anyone to tell you that. Just go back and look at the title. If that sounds like your kind of thing, then it most likely is.