By Metro Weekly Contributor on October 12, 2007

IT MUST BE stated clearly and concisely: Shelter is an incredibly good movie.

And the reason why it is so important to state that fact very clearly is because there are so many reasons why Shelter should be completely awful. 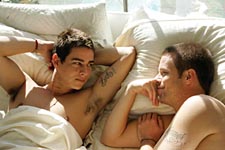 The plot is the familiar and unsurprising ”Will they make it work?” romance we have seen before. The soundtrack is the kind of melancholy pop that one would expect to be leaking from beneath the bedroom door of a sullen teenager. The setting is a gorgeous landscape populated with sun-scrubbed streets (even the ones in bad neighborhoods), bonfire speckled beaches and gleaming surfers fresh from the ocean. Director Jonah Markowitz has crafted a breathtaking love letter to the California coast.

So how is it that all of these seeming liabilities come together to make such a wonderful movie? Because the couple we are rooting for amidst all the music and the gorgeous scenery are two very likeable, pleasantly real men and that gives Shelter the feel of something altogether different.

Sporting the look and the feel of a mainstream picture Markowitz’s film tells the story of Zach (Trevor Wright), a talented young graffiti artist who has put his own life and dreams of art school on hold to take care of his sister and her young son. Through the kind of coincidence that makes this kind of movie work, Zach begins spending more and more time with Shaun (Brad Rowe, of Billy’s Hollywood Screen Kiss), the gay older brother of his best friend. As their relationship begins to grow and change, Zach finds himself forced into making decisions about who he is, what he wants and who he wants to become.

Beautifully rendered and smartly cast, Shelter will offer many in the audience the kind of warm, cinematic romance they’ve been waiting to see. — Tom Avila