I’M NOT SURE what gay filmmakers in the Philippines have been smoking lately, and I’m not sure I’d want some.

Last year’s festival presented a number of serious Filipino films, including the magnificent The Blossoming of Maximo Oliveros and the politically paranoid Compound.

This year we get musical numbers, space Amazons, flying zombies and giant frogs.

Not that that’s a bad thing.

Ada has lived a hard life in Manila, unable to find love and still bearing the emotional scars of growing up gay with a homophobic and abusive father. The defiantly feminine beautician moves to the country for escape, along with his niece, and opens a shop next door to the town hunk, Dodong.

One night, while singing in the shower, a pink meteorite crashes into his stall bearing the inscription ”Zaturnnah.” One thing leads to another — I can’t even begin to explain how — and Ada swallows the brick-sized stone, says ”Zaturnnah!” and wham, bam, thank you ma’am, turns into Electra Woman. 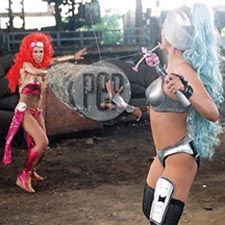 Sorry, I meant ZsaZsa Zaturnnah. But it’s easy to mix the two when the movie basically looks like what would happen if Sid and Marty Kroft had gotten their hands on cheap CGI effects back in the ’70s.

Now endowed with superpowers — and real breasts, as Zaturnnah is to Ada what Shazam was to Billy Batson — Ada becomes the savior of her hometown when the aforementioned space Amazons test her powers with the giant frog, the zombies, and a nefarious plan to turn all the men into women.

Don’t even worry about the plot or the acting or the script. It really is the type of film that’s so spectacularly stupid it becomes compelling to watch. And Dodong is pretty easy on the eyes, to boot. And the fake Matrix bullet-time effects are hilarious.

High art? No. High something? Most likely. Definitely worth the, um, trip. — SB