SOMETIMES YOU HAVE to wonder if something is really bad or if you’re just not getting it. In the case of Before I Forget, it’s a combination of both. Its plodding plot and disjointed storyline make it difficult to follow and dull to watch. 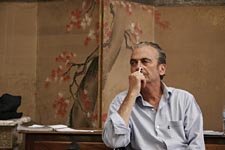 Before I Forget is a story of faded youth and the repercussions of decisions made long ago. Pierre (Jacques Nolot), a former gigolo, is suffering from age, HIV, depression, and the loss of his benefactor. Also written and directed by Nolot, the film is a lingering examination of Pierre’s life, which consists of the occasional purchased sexual encounter, countless conversations about call boys with other older men, laments about mistakes made, and lingering stares off into the distance.

Pierre rambles around Paris in a stupor, complaining to the few friends he has left (and his therapist) and wanders back and forth through his apartment. It’s these scenes — watching him walk from study to kitchen to couch to kitchen — that are the most excruciating. Just as Pierre is trying to find the meaning for his life, Nolot is trying to find the meaning of his film. The occasional point of interest does appear — the interactions between Pierre and Paul (Marc Rioufol), another former prostitute, are the most intriguing — but are too few and far between.

Unfortunately, any meaning that Pierre is able to find during his journey is far outweighed by the relief that the movie is over. — TP