LET’S HEAR IT for documentaries, the neglected film form that too often plays to half-filled houses or is sandwiched between movies on cable. If it doesn’t involve really bright tropical fish swimming in high definition, documentaries don’t seem to have much chance of gaining a wider audience. 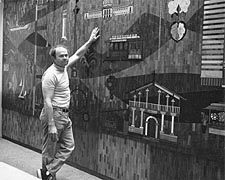 So, if you’re perusing this year’s Reel Affirmations listings only in search of the biggest musicals or the most nudity — or both, as this year would have it — do yourself a favor and pick out at least one documentary program.

The double-feature ”Loving Life” would be an excellent choice, as the films tell two very different, yet completely compelling, stories of gay men who’ve come into their elder years with dignity and grace.

Emile Norman: By His Own Design (

) leads off with the story of a small boy who grew up on a Depression-era California ranch and went on to become a noted American artist — and likely would have been far more famous had he not followed his own path away from the New York art world and to his home in Big Sur. 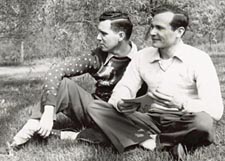 Norman, now in his 80s and still working daily in his studio, carved out a life for himself and his lover/manager, Brooks Clement, that in retrospect seems improbable. As the camera follows him through his present-day routine in a house filled with his own frankly gorgeous designs, Norman and the people who knew him tell the story of his life as an artist and a gay man in the pre-Stonewall era.

), which chronicles the story of two soldiers who met in post-war Munich and decided to build a life together in 1950s America. The two face a far different world than Norman — Bob and Jack end up buying a small radio station in the Pacific Northwest and obviously struggled more with how to handle their love for each other while living in the broader world. But their story is just as important.

The couple admits they have no magic formula to offer as to how to stay together, but they don’t need to. Sometimes the showing the possibility is formula enough. — SB