All Dressed Up and Nowhere to Go

WHEN A REEL Affirmations series focuses on gender, what we usually expect is a program exploring transgender issues. After all, that gay gals and gay guys often don’t exercise the traditional definitions of their respective genders, is something of a given. Lesbians and gays are, by definition, gender variant — even if, these days, there are plenty of gay men who want to watch football and plenty of lesbians itching to be moms. 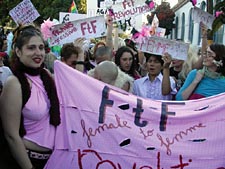 With ”All Dressed Up and Nowhere to Go,” a new step is being taken. Remember when ”drag kings” were new and all the rage? It seems these days that burlesque-performing girlie grrls are the next wave of gender disobedience. FtF: Female to Femme (

) takes a probing look into this movement, busting out of the closet, whereby ”lipstick lesbians” are claiming the femininity with femme pride. Just look for the parade contingent. Filmmakers Elizabeth Stark and Kami Chisholm interview an exhaustive list of women, such as Guinevere Turner and Jewelle Gomez, on the topic. Poet Meliza Bañales talks about being scorned in Santa Cruz for wearing lipstick. ”It’s appropriation by ‘the man’!” These women are the film’s strong suit. Not so strong is the apparently satirical ”femme transition support group.” There’s nothing particularly funny about this. And when actual support groups exist for, say, women with facial hair, who’s to know? Chisholm and Stark make amends with abundant burlesque footage.

), which in a hundred years or so will be entertaining fare in mainstream history classes, is today the stuff of an esoteric anthropology program. True, it may seem silly that public potties in our post-Ally McBeal world are still divided by gender. But it may be sometime till more than some fraction of a percent of people consider this a topic worthy of resources. Shani Heckman’s film does bring us one step in that direction.

A handful of women in Budapest spending a day learning how to masquerade as men, thanks to a small group of drag kings in from Berlin, is an intimate few hours in which we’re privileged to take part. Direct from the Budapest Lesbian Film Collective, Bandage, Socks & Facial Hair (

) is the most entertaining offering in this program. The possibly unintentional charm of this short is that the Hungarian lesbians, while playing the part wonderfully, just can’t seem to manage to be quite so stern as their German teachers. It’s as if the Berliner instructors want to show them how to act like straight men, but the Hungarians are all more comfortable as gay boys. Bandage spices the gender goulash with some Hungarian psychology that has a hard time not being cute. — Will O’Bryan

All Dressed Up and Nowhere to Go