INEVITABLY THERE are going to be HIV/AIDS-centric films in a GLBT film festival. But with countless films already out there about this topic, when one as touching and well-crafted as The Witnesses comes along, it’s especially worthy of praise. Director André Téchiné has crafted an amazingly refined film that touches on the humanity both of those with HIV/AIDS and those around them. 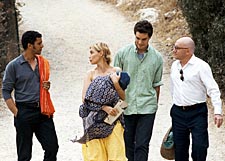 Young, beautiful Manu (Johan Libéreau) forever changes the lives of a small group of friends in Paris in 1984. While visiting the gay cruising parks, Manu befriends Adrien (Michel Blanc), a middle-aged doctor who, despite his love for the young man, only nurtures him. Theirs remains a platonic love. It is not until new parents Mehdi (Sami Bouajila) and Sarah (Emmanuelle Béart) complete the circle do the positive and negative effects of Manu’s presence truly reveal themselves.

The Witnesses captures the first days of the AIDS crisis, when information was slowly being discovered about its origin and transmission. This fearful time allows Téchiné to reveal different layers of each character, allowing all to be heroes and cowards. Since each is motivated by love and fear, even at their worst they are worthy of forgiveness. While all the actors give fantastic performances, Libéreau as the charismatic Manu and Bouajila as the distance Mehdi are true stars.

Wisely skipping any prolonged death scenes, the film instead focuses on how the lives of those touched are changed and who remains to bear witness to what has happened. The Witnesses is one of the gems in the festival and should make your list of must-see films. — TP