By Randy Shulman on October 14, 2007 @RandyShulman

ANYONE FAMILIAR with Charles Ludlam’s ludicrous, uproarious staged satire of genre films, The Mystery of Irma Vep, is bound to be tickled pink by this Brazilian nutfest, in which a pair of actors, nationally renowned for their definitive work in Ludlam’s comedy, are unwittingly lured out of retirement to perform it once more. And even if you’ve never heard of Irma Vep, it’s likely you’ll still find the film an utter joy. 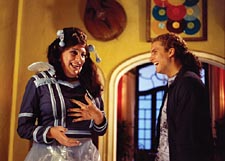 Directed by Carla Carmurati with a surreal, absurdist flair, this mostly behind-the-scenes comedy manages to hit all the essential Irma Vep touchstones. But the real pleasure is in watching the turmoil surrounding the stage production. It’s kind of like Noises Off, but without the door slamming.

It’s impossible to describe the film without giving away its most delectable secret, a giddy revelation that arrives early (for those paying attention) and which, in its own special way, pays homage to Ludlam’s masterpiece, in which two characters take on eight roles.

There’s nothing specifically gay about the film, though one of the main female roles — Cleide Albuquerque — is portrayed by actor Marco Nanini, and he is bliss to behold. There’s also an overt narrative reference to Whatever Happened to Baby Jane?, featuring a spectacularly funny one-line throwaway from Cleide’s wheelchair-bound brother, Tony. 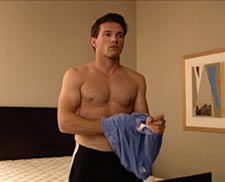 The movie is fueled by an atomic frenzy, and therein lies a minor problem — the lines are hurled out so fast and furious, it’s hard to keep up with the subtitles and keep your eye on the actors. Might be a good time to brush up on your Portuguese.

Irma Vep is preceded by Where We Began (

), a 14-minute short about two ex-lovers — one whose life took a downturn from drug abuse, the other who shouldered the relationship until he could stand no more — who meet in the park where their romance started, both with very different agendas. The film is competently made, but boy, is it ever a downer. Just plain glum. And it’s certainly not the kind of film to get you primed for the buoyant, light-as-air comedy to follow. So consider being fashionably late for this particular program. Like, say, about 14 minutes. — Randy Shulman