A HAPLESSLY SUICIDAL young woman. A hopelessly lonely pet groomer. A beautiful eastern European immigrant working her way up the social ladder by fulfilling the sexual fantasies of an obnoxious and under-endowed lawyer. A wronged wife seeking revenge, along with her lovelorn best friend. And two computer programmers convincing two female workers that they’re not gay, but nudists. 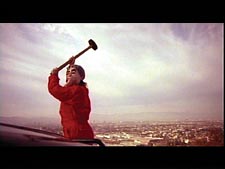 These are the people who spend their lunch hour in Park, a comedic character study set in a secluded Los Angeles park where their stories will all interconnect to varying degrees. Unlike most navel-gazing L.A. films — the solipsistic side-effect of the film industry’s location is the endless fascination with its home city — Park has the advantage of actually being funny, at least for the bulk of its runtime.

Writer-director Kurt Voelker keeps his separate stories moving along briskly, and early in the film creates some nice gags: The suicidal April (Dagney Kerr) is forced to keep asking her neighboring park visitor for assistance as each successive attempt fails (”Take, take, take, that’s me!” she chirps).

William Baldwin plays the overcompensating lawyer, Dennis, who gets off on the power of his big, throbbing SUV. Baldwin, a ’90s heartthrob, these days looks like he could sub for his brother Alec on 30 Rock and no one would know the difference. He brings a certainly gleeful malice to the role. As his vengeful wife, Peggy, Rikki Lake reminds everyone that she used to act.

While filled with some pretty good performances and a snappy beginning, Park falters toward the end as the moral of the story looms over them all. A speech by a tow-truck driver who arrives on the increasingly chaotic scene is a bit cringe-inducing — it’s fitting that he delivers it while wielding a sledgehammer. And the discovery by one character of her inner lesbian ends up feeling more trite than uplifting.

Even though Park feels like a short film padded out to feature length, it still spins enough laughs and recognitions to make it a worthwhile way to spend a lunchtime. — SB