By Metro Weekly Contributor on October 15, 2007

STEAMY COMES IN doses of five to 15 minutes in ”Short Hots,” a collection of entertaining and at times arousing short films. 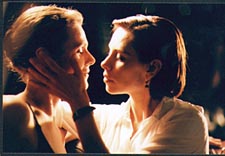 ) is wrought with sexual tension as a woman interviewing for a job at a wine company focuses not on the man questioning her, but on the fantasy she’s entertaining. When he asks her what she loves about wine, she gets downright Harlequin: ”Each time I discover a new wine, it feels like the beginning of a love story. … We smell, we taste. Then the flow reaches the lips, penetrates the mouth, and drives us out of our minds.”

), a frustrated neighbor tolerates the noisy sexual escapades of her macho neighbor, who brings home a new playmate daily. But when Friday comes around, the catch of the day would rather send him out on errands and check out the girl next door. What Hot Guy (

) is cute and short, albeit a little obvious; a pair of strewn-aside boxers tell an unexpected tale. Happenstance (

) hints at racist undertones, but when Mom — brilliantly portrayed by Margaret Colin — shows discomfort with her son’s black girlfriend, it’s much more complex. Sugar in the Blood (

), an empowering story of heartbreak and reclaiming power in a relationship, brings a little drama to the collection, but even this serious is not without sexual tension.

A universal fantasy is played out in Long Ago (

), when a throwback rat-tail hairstyle is shown being snipped again and again. Main character Maddie is sexy right up until she turns around and reveals the long thin braid falling between her shoulder blades. ”She just needs to modernize,” her friend observes. ”The rat tail is the tackiest lesbian accessory ever.” 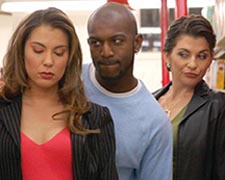 ) just may be one of the hottest films ever made that contains no nudity and no dialogue — just phone sex with a twist.

) is hilarious and features a cameo by Jane Lynch, who’s never met a role she didn’t steal the show with. Two sexual minorities in a gay-dominated world struggle to come out of the closet as straight and find love. One explains that he wants more than the straight male stereotype: ”I see the relationship that my dads have, and I want that kind of stability,” he tells his friend, a (gay) bartender. Meanwhile, a closeted straight woman explains to her therapist that heterosexuals can sense each other out: ”We call it ‘straighdar.”’

), exercise gets fun when the lights go out in the locker room during shower time. Check Out (

) is cute and funny but doesn’t live up to its promise, ultimately falling flat.

Finally, the 28-minute A Lez in Wonderland (

) plays like a tourist pitch for the Dinah Shore Week in Palm Springs, perhaps more entertaining as a souvenir video than an informational tool. But it would be disingenuous to suggest that there aren’t scintillating scenes among the footage of those lesbians frolicking in the desert. — KC