By Metro Weekly Contributor on October 17, 2007

EARLY IN SPIDER Lilies, it is said that a tattoo artist’s job is to understand the secrets behind a subject’s tattoo, but not to reveal them. Like his own subjects, director Zero Chou works under this same interdiction, painting around and around the central secrets of his characters’ lives, but eventually (thankfully for his audience) relents, coming to some sort of decision that there might be some value to living their lives out loud, after all. 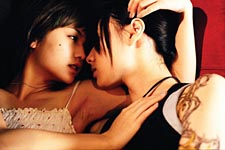 Jade (Rainie Yang) and Takeko (Isabella Leong), childhood lovers, meet coincidentally as adults, but each is unsure if the other remembers (or wants to remember) the other. Jade, an Internet ”Web girl” (a Taiwanese euphemism for a kind of porn star), displays a childlike innocence that at first seems constructed to attract the most nefarious of lascivious intentions from her audience. However, we soon come to find out that Jade really is as innocent as she seems, despite her profession. If anything, she is lonely, abandoned first by each of her parents and then by her first love, Takeko. Despite her experiences, she retains a youthful insistence on authentic relationships, particularly with Takeko, and cannot understand why Takeko pretends not to remember her. Takeko, for her own part, has been living in her own hell, believing that she invited tragedy into her family as a teenager by giving in to her desires for Jade. Having lost her father, she now works daily to maintain a tenuous connection with her brother, who lives in his own haunted oblivion.

Chou skillfully interweaves scenes of the present and the past, incrementally unlocking pivotal moments of his characters’ histories, in the process perhaps suggesting that all these moments coexist simultaneously — moments of oblivion, memory, relationship, isolation, falling in love, falling into denial, getting lost, getting found. Spider Lilies won the Best Feature Film award at Berlin’s 2007 International Film Festival, and we can see why. — NL

Add to My Profile | More Videos