DYKE in the DNA: Women’s Shorts

By Metro Weekly Contributor on October 17, 2007

THERE ARE NIGHTS when you want meat and potatoes — readily available — for dinner. (Come on, you can admit it.) And then there are nights when you just want plate after plate of hors d’oeuvre. Thankfully, in the world of cuisine there are tapas restaurants. And in the film world, there are shorts. The ”Dyke in the DNA” program serves up just enough of the sweet and the savory to nourish all the key appetites of your ”dykes in shorts” palate: earnest lesbian dying to be free; irreverent queer; suffering soul sister; pensive and discerning philosopher lesbian; and more. 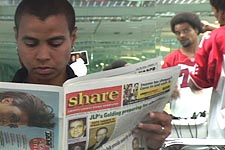 ), which uses all kinds of Jewish staples — bubbie and granddaughter relationships, Yiddish music, hand-rubbing and story-telling — to recount the tale of a belated coming-out. Music by the director’s own band, Pomegranate, and photography by Jennifer Polo elevate a touching monologue to an artistic level that the pickiest of gourmands can savor.

) exhibits a comic irreverence for relationships and monogamy as Jennifer Catizone’s character maps out two divergent relationship possibilities that will ultimately end in the same disenchanting destination. Funny and flip, though, Red/Blue makes sure we know which road is the more enjoyably traveled.

), which unravels the cold vital threads of family and romantic relationships that are meant to be intimate, but instead pare away at our humanity with each disappointment.

Black Men and Me (

) pairs film and monologue that are individuated enough to be separate documentaries, but so expertly related that neither could succeed as well without the other. Michele Pearson Clarke deconstructs her own experience of affection and attention between male and female in the black community with a discerning and illuminating eye, expertly reflected in the exposition of glances and jokes in which she engages at her local barbershop.

) offer pleasant and humorous intermezzi to clear your palate, as a cherished uncle makes his transition from Mike to Michelle, and a street psychic makes a startling discovery that will change the life of more than one woman. Boot Scootin’ Beauty (

) is another fun farce that tells us how a mighty tall, two-steppin’ mama and a love-struck cowboy find their way together on the dance floor.

) cheers the blossoming love between two girls while subtly building hints of an impending threat to one of them. Dynamic use of underwater imagery in particular helps bring us into Georgie’s point of view as she becomes more aware of her perils, but not what to do about it.

) could have been just another coming-out trilogy, but director Katherine Wilkinson’s selective hand bring us three completely fresh, special stories.

Given their much-touted comfort with sexuality in general, one would think if anybody would have an okay time falling in love with their best friends, it would be the French. Caroline Dubreuil and Daphne Favreliere prove it just ain’t so in Myriam Donasis’ The Creased Bed (

), what could have been a deadly serious brush with the law in 1950s England for two cross-dressing friends instead leads to a sexy striptease and a heartwarming ending as the gays put one over on the bobbies. — NL

DYKE in the DNA: Women's Shorts