By Randy Shulman on October 18, 2007 @RandyShulman

WHEN YOU WANT perfection in short movies, look no further than those produced at film schools. In the case of Caress of the Creature (

), the film school in question is Florida State University, where director-in-training Stewart McAlpine has lovingly, meticulously crafted a dead-on satire of Universal’s Creature from the Black Lagoon. The look of the film — with its period B-movie black-and-white footage — is nothing short of remarkable. And the joke, about a lagoon-creature that tickles the foot of a manly foreman, awakening his softer side, is uproarious. The best scene is set in a town meeting, where the locals grouse, ”We should have never built that scented-candle factory.” Pure genius. 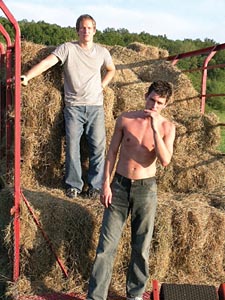 ) is a cuddly tale of Chris, a gay Chinese-American man who brings his white boyfriend, Pierre, home for the holidays. The parents — particularly the father, who insists on calling the boyfriend ”Pear” — don’t take well to the addition to the family, but all is righted by the end. Directed by Michael Mew, the film suffers from timing problems with too much lag time between bits of dialogue, giving the exchanges an artificial feel.

) suffers from the same problem as Turkey — the dialogue, at least the portions that are spoken (some of the film is subtitled), come off as unnatural and stagy. This shouldn’t come as a surprise, as the film’s director and star, Rick Hammerly, is a comic legend in the local theater scene. What does work in this story of a middle-aged gay man who goes out to the bars one night and meets a younger deaf man, is its message. There’s poignancy in Hammerly’s approach and it’s conveyed artfully and, in a stunning final shot, without words, just a prolonged glace in a mirror. Hammerly’s visual eye is strong. If he can adjust his dramatic ear, we could see a great filmmaker emerge from an already-flawless actor. 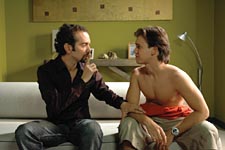 The only thing that provides Masquerade (

) a hint of interest is that there’s a bathroom sex encounter. Larry Craig should take notes on the right way to do it.

If you recognize the name Mark Christopher, director of Heartland (

), you’re either recalling his stunning 1996 short Alkali, Iowa, which played at Reel Affirmations many years back, or his feature film fiasco, 54. Either way, he’s once again crafting shorts and this one is a throwback to Alkali, as H.G., a young man who escaped his farm roots and made a new life in New York, is forced back home to help save the family farm. Luckily, there’s a distraction: a farmhand named Ryan, who spends most of his time in shirtless, sweat-drenched splendor and ignites lust and longing in H.G. the way only a shirtless, sweat-drenched farmhand can. Christopher is an accomplished filmmaker, so he has the luxury of toying with an unusual narrative style, one that might be risky in less-experienced hands. Unfortunately, the film ends up exactly where you expect it to, and feels more humdrum than it should.

), in which the characters are made to look like creatures from an episode of The Outer Limits. Once we get into the live-action portion of this story about a 16-year-old gay boy and his impact on a middle-aged gay couple in the apartment upstairs, Angel Almazon and Medardo Amor’s dazzling, disarming comedy springs to vivid, vibrant life. Finally, Daddy’s Boy (

), which features one of the best final gags of any short I’ve ever seen, is funny, fresh and inventive in that Down Under kind of way. — RS