The Curiosity of Chance

TEEN COMEDIES HAVE been standard movie fare ever since — and perhaps prior to — Sandra Dee’s Gidget jumped on a surfboard in 1959. The Curiosity of Chance follows suit, setting itself in the mid ’80s and therefore in grounds once tilled by John Hughes, who brought us Sixteen Candles (1984), The Breakfast Club (1985), Pretty in Pink (1986), as well as other movies that did not star Molly Ringwald. Maybe that’s all that Chance is missing: a Molly cameo to make it complete. Still, director-writer Russell P. Marleau does pretty well without. 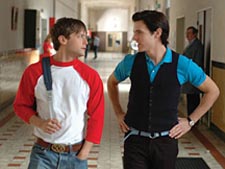 Born in 1965, we can guess that Marleau’s tale of teen misfit-ery is informed by at least some of his own class of 1983 (presumably) experiences. We can also guess that he attended an international high school in Western Europe. This is where he drifts a bit.

Marleau has all the staples. First, there is the downtrodden protagonist, Chance Marquis (Tad Hilgenbrink), whom the audience immediately recognizes as a cut above his peers. There is the hot love interest, Levi (Brett Chuckerman); and the bully, Brad (Maxim Maes), with the Dutch accent. Huh?

Marleau has made the teen-comedy genre his own by making Chance a period piece, by making it gay, and by setting it in school of various nationalities in an unnamed country. The first two elements work wonderfully. An exasperated plea, ”Somebody should really invent portable phones!”, from Chance’s tough, new-wave gal pal, Twyla (Aldevina Da Silva), is delivered perfectly, for example. And the gay angle is, of course, why we’re talking about Chance in the first place. Watching our hero discover his inner drag queen, his stirrings for Levi, and his nerve is a delight.

That third element, Brickland High School’s ambiguous setting, is something of a distraction. Granted, it’s novel. There’s a mother lode of potential stories to be set in any of the many dozens of American and international high schools around the world that mix American teens and exotic locales. There’s not really anything in Chance’s story, however, that necessitates the unusual setting. Even the nightclub he and his pals sneak into is age-restricted — unlike many European clubs, but just like any Chance would’ve encountered in Hughes’ favored Chicago area. So why did Marleau film in Belgium? That much is unclear.

The setting is a small point, though. Marleau follows formula and it works. Curiosity of Chance is a sweet, heartfelt comedy, downright wholesome compared to its teen-comedy contemporaries, and offers a soundtrack boasting everything from A Flock of Seagulls to Journey to put audiences in the right frame of mind. — WOB

The Curiosity of Chance