On Sunday, Nov. 18, however, with the Dallas Cowboys defeating his beloved Redskins, 28 to 23, Alexander, the chief hearing examiner of the D.C. Commission on Human Rights, was not having a good night. 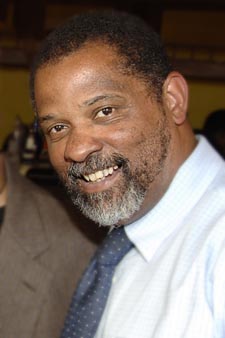 Those were the final two text messages Michael Yudin, a longtime friend of Alexander’s, received on his cellular phone that night since he could not watch the game with Alexander in person.

It would be the last time he would ever hear from Alexander.

The 55-year-old native of Montclair, N.J., had been diagnosed with prostate cancer several weeks ago and was undergoing radiation therapy.

Glenn Mlaker, owner of the Dakota Cowgirl restaurant near Logan Circle, organized a schedule with other friends of Alexander’s to take him to Howard University Hospital for his daily dose of radiation.

But Alexander didn’t make it to the hospital on Monday. Instead, the avid Redskins fan lay dead on his bedroom floor while friends knocked anxiously on the locked front door. He is reported to have died of natural causes.

Alexander’s close friends and housemates, partners Dan Dutcher and Jim Fratoni, were devastated by the news.

”He was my best friend and one of my closest brothers, so it’s still kind of fresh,” says Dutcher. ”I don’t know that he’s going to be easily replaced, either in the city or by his friends, because he was a one-of-a-kind type of guy.”

Many friends, particularly those from Washington’s leather community, echoed that sentiment.

Steven Ranger, corresponding secretary for the Centaur Motorcycle Club, the local group that stages Mid-Atlantic Leather Weekend and of which Alexander was an associate member, says he was ”stunned” upon receiving a call from the group’s president to inform him of Alexander’s death.

”We have what we call the ‘phone tree,”’ says Ranger. ”When a [friend] dies, all the officers of the club have a list of members to call, so we can personally tell them, versus sending out an e-mail, to deliver it a little bit more humanely.” Ranger called 20 members on Monday to spread the news.

”There was a whole lot of shock,” he says.

Over the past decade Alexander had become a fixture in Washington’s GLBT leather community. In addition to taking part in — and often leading — multiple fundraisers in Washington, including Scarlet’s Annual Bake Sale and Auction, Alexander was the former president of the Highwaymen TNT and served on the board of The Center.Yudin, who works as the senior council to Sen. Jeff Bingaman (D-N.M.), says Alexander loved the law.

”He loved fighting for social justice. He dedicated his whole career to fighting discrimination in Washington and in the gay community. Neil was fighting for what’s right and was on the boards for everything he could get on.”

As a judge, Alexander garnered prominence for a 2001 decision on Roland Pool and Michael Geller v. Boy Scouts of America, originally brought to the courts in 1992. The case involved the National Boy Scouts of America’s discriminatory membership policy based on sexual orientation. Alexander and the D.C. Human Rights Commission ruled that the Boy Scouts violated the city’s Human Rights Act by prohibiting gay individuals from taking part in its group.

Alexander originally moved to Washington to attend Howard University, where he acquired a bachelor’s degree before earning a law degree from Rutgers University School of Law.

Dutcher says he met Alexander at the D.C. Eagle, not long after Alexander’s partner Darrell B. Osher died from AIDS-related complications in 1992.

”We became instant friends,” says Dutcher. ”He was in the Highwaymen TNT. I was in Centaur MC. We just became bar buddies.”

Like Alexander, Dutcher also lost a partner to AIDS.

”We had similar histories, and we both went through the process. I don’t think he ever got around it to enter into a new relationship. It was just really difficult for him.”

Dutcher says Alexander was ”a caring individual who enjoyed making new friends. Neil was a very gregarious person who was totally enthused about life…. He will be missed.”

”Neil lived life with so much vigor. I would hope that if he had a moment of consciousness before he died he had absolutely no regrets. He smashed everything into his short 55 years, and we were all lucky to go for the ride with him.”