'Women of Brewster Place' is a brilliant production that has you enthralled in the moment, then thinking hard for days

The wonder of this musical theater version of Gloria Naylor’s novel, The Women of Brewster Place, is all the honey where you would expect vinegar. In these seven women’s stories, springing as they do from one sad corner of ”Any City, U.S.A.,” we see nearly every horror of urban poverty: oppression, ignorance, violence and the fragility of human hope. It seems impossible that these voices would not ring with rage, that fingers would not point out at an audience with the time and money to attend things like the theater. And yet, though wrung and torn and indeed sometimes angry, what these women share most with us is their life force and, even, their joy. This is not a tirade but a testament to refusing to go numb in the face of injustice. It is about the pure grit and coming together of this group of women as the ”bombs” fall.

And unlike Arena’s other recent women-oriented blast from the past, The Heidi Chronicles, this production, though set in the 1970s, has been crafted to pass the test of time. The humor is irrepressible, the themes enduring. Equal in power is the music, flavored with the sounds of the ”Me Generation,” but reaching also into the rich, enduring, traditions of soul, gospel and good, old-fashioned Broadway song. Thanks to Tim Acito’s clever and insightful music and lyrics, this is a festival of great music and great theater delivered with superb pacing and movement by director Molly Smith and her creative team. 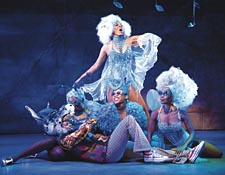 And then there is the je ne c’est pas factor. Though full of highly recognizable cultural symbols, this is not Disney’s retro ghetto. Acito has acknowledged paring down Naylor’s characters to fit the musical theater medium but these women still fill the stage with complexity. The crosses they bear, their dreams, their conflicts in this urban pressure-cooker may be superficially predictable, but they are nevertheless written and performed to provoke the mind on another level.

Take the First Act, where we meet Marva Hicks’ Etta Mae, the bombshell who can’t seem to get a man of her own. It’s laugh-a-minute as we see Etta Mae scandalize the ladies at church as the lovable harlot. But we meet the much more complex Etta Mae in her show-stopping number, ”Man of God.” In this beautifully rendered song, Hicks gives us Etta’s joie de vivre right in step with her loneliness and her shame. Nothing about this woman is right or wrong — it is just real and raw.

Then we have the energetic Monique Midgette as Kiswana, the middle-class girl who thinks she can change the world one housing project at a time, bouncing through Brewster Place with her Che Guevara poster and her afro. We think we’re in for a Heidi-style clichÃ©, and then along comes her mother played and sung superbly by Terry Burrell (in one of several roles), and suddenly all kinds of pre-conceived notions get blasted out of the water. It’s these kinds of moments, where our expectations are challenged with intelligence and good humor, that make you want to stand up and cheer.

Act Two brings us the travails of the self-outing gay couple Lorraine and Tee who pull us into another thought-provoking subplot. Note how their relationship is not all about being gay — it is just as much about the struggle to connect in the any relationship. Harriet Foy’s Lorraine is particularly moving as the walking wounded and she has a lovely, deep golden voice. Suzzanne Douglas as Tee is a little less vocally sure, but dead-on dramatically as this hard-as-nails woman.

Of the other women with stories to tell, Shelly Thomas as Lucielia, the young woman waiting on her child’s father, though obviously trying hard, seems somewhat ill-at-ease with the music and her character. Tijuana T. Ricks, as a disillusioned single mom with her brood is very compelling, a very interesting stage presence, but her often cultivated voice doesn’t fit with her willingness to call her kids ”dumb-ass.” Still, her rendering of the song was one of the more memorable of the night. Of the ensemble, the fabulously lush-voiced Cheryl Alexander stands out for her tremendous presence in portraying the ultimate gossip and later a quite magical Parliament-style creature in the snippet of A Midsummer’s Night Dream. Eleasha Gamble, as Wanda, part of the gossiping trio, is fun and energetic.

THE WOMEN OF BREWSTER PLACE

And then there’s Tina Fabrique as Mattie, the vocal and emotional cornerstone of this production. Mattie, one of the longest residents of Brewster Place and a tireless factory-worker, has seen it all and pretty much lost it all. She lives with her own demons but remains the heart and soul of all that is good about this despairing corner of the city. Fabrique does a stellar job here, singing regularly for two hours in a myriad of musical styles and bringing each her own unique sound. Her voice is earthy and sweet, loud and subtle. And just when you think she’s about to go all syrupy, she thrills the ear and soul with something from her natural mÃ©tier — the blues.

The Women of Brewster Place is a very special piece of musical theater, fabulously entertaining and yet holding tight to the despair and hope of its characters. It is the kind of brilliant production that has you enthralled in the moment and then thinking hard for days.