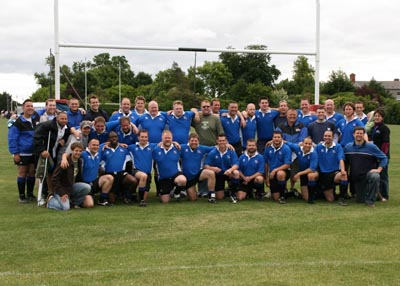 When Will Marshall first joined the Washington Renegades Rugby Football Club (RFC), he didn’t know the rugby team was then predominantly gay.

”I found out a few weeks later,” says Marshall, a straight player who also serves as the Renegades’ recruitment chair. ”We were all taking off our rugby clothes, because we usually go out after [practice], and we were putting on our bar clothes, and one of the players was putting on a skirt, a wig and high heels. It was just there in front of me.”

The revelation happened the night of Washington’s annual High Heel Race down 17th Street NW, adjacent to the Renegades’ practice field. Marshall notes the team’s current ”50-50” gay-straight ratio is not an issue.

”I like everybody on the team, and what I find is it adds a different level of interest,” he says. ”I can go down to a sports bar, chug beers and talk about the football game, but it gets old. [With the Renegades], I find the intelligence level to be very high, so the conversation is good.” 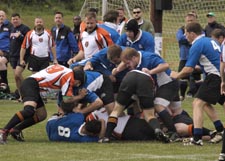 So is the travel.

Last week, the Renegades returned from Dublin, where they wrapped up their spring season from June 12 to 16 by joining 32 other rugby teams from around the globe at Dublin City University, competing for the Mark Bingham Cup.

The tournament, which is held biannually in various cities, is named for the 31-year-old gay rugby player who played with the San Francisco Fog RFC. He was a passenger on United Airlines Flight 93, which crashed in Shanksville, Pa., on Sept. 11, 2001, as passengers apparently resisted the plane’s hijackers.

The Renegades have competed for the Bingham Cup before. In 2006, the team won a third-place cup. This year, in Dublin, they were hoping to beat that record. 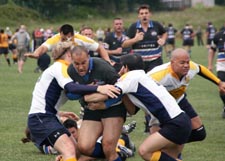 ”We didn’t do so well in the tournament bracket, but it was still a good time,” says team member Jim Barrett. ”It was a great, beautiful country and the hosts were wonderful. The fields over [there] are great. We sometimes have hard-packed dirt and mud fields. [Ireland] had freshly groomed fields and nice accommodations.”

”We’re obviously disappointed,” says Ned Kieloch, president of the Renegades. ”You go wanting to win. Both of our sides made the quarterfinals, which is nothing to sneeze at. Our A team in fact only lost one match in the tournament, but unfortunately the match they lost was the quarterfinal. And if you don’t win that, you don’t go any further.”

Nonetheless, Kieloch is keeping a positive outlook for the upcoming fall season.

”We’ve got nothing to be ashamed of,” he says. ”I think we can take away a lot from how we played there. We can learn a lot, in a sense, about what we need to do better next time.” 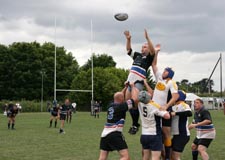 ”Rugby is a gentleman’s game. You may beat the pits out of each other on the pitch, but when it’s all said and done, you shake the hands of the team you played against, you wish them a good game, and you wish them good luck in the rest of the tournament.”

Due to prospective job opportunities, Scheller says he does not know if he will be in Washington when the new season begins. ”I was a little upset,” he says, ”because I really did want to go out with a bang. But you get banged up a lot, so you don’t know how much longer you are going to play.”

That’s putting it mildly. As expected, in Dublin there were injuries: Some players pulled muscles and two suffered concussions. One player suffered a broken collarbone.

Still, despite the loss and injuries, Barrett, who joined the team in 1999, says the good outweighs the bad.

”We play almost every Saturday over the course of a month in the spring and the fall — that’s what I like most. It’s not just practice, it’s actual play.

”It took us awhile to develop a team that was competitive in the local union, and back then we were kind of on top of the games with the gay teams — but that’s changed, radically. This year it was obvious that the quality of gay rugby has increased across the board.”

In the coming season the team hopes to improve at conditioning and preparing for games. ”It wouldn’t hurt to have more good people,” admits Barrett.

”We’ve always been a club that’s been open to everyone, and it’s one of the most beautiful things about this club,” says Kieloch. ”It’s a terrific bridge-building opportunity for us, and our straight guys are the best ambassadors you can imagine. They’re just a bunch of terrific guys and we’re all about the rugby.”

← Previous Story Spinning its Wheels
Next Story → From Acting to Actual