Disney's 'The Lion King' is not to be missed, while the politically incorrect 'Red Noses' offers a change of pace

At some point — and for some the transition passes by virtually unnoticed — Disney becomes a brand. That is not to say that there has ever been a time when that iconic mouse in the red shorts wasn’t backed up by a business model. But for many there comes a time when the copyright mark at the end of all things Disney becomes as impenetrable as the hedge Maleficent created outside the walls of Sleeping Beauty’s castle.

We refer to the Disneyfication of New York’s Times Square and watch as princesses transform from plucky young heroines to hardcore marketing sirens. The Mouse is a bit Mafioso. He’s got an offer he’s sure you won’t refuse. Because if you do, your kid is going to make you really, really regret it. 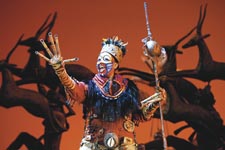 But what cannot be disputed is the ability Disney has to bring together great talent. Regardless of what merchandise Disney the company decides to plant mouse ears on — beach towels, sleeping bags, waffle irons — Disney the spirit is still in the business of inspiring wonder.

Some 10 years after its Broadway premiere, Disney’s The Lion King feels as imaginative as the first time audiences witnessed the complex puppetry, masks and costumes designed by the Tony award-winning Julie Taymor. In fact, The Lion King may actually do more for the adults in the audience than for the children who drag them there. For those whose Sunday nights were once spent in front of the television watching the fireworks-laden opening of The Wonderful World of Disney, The Lion King is a reminder of the magic that still exists behind all the marketing.

The Lion King cleaves very close to the story told in its animated counterpart. The birth of Simba the lion cub is met with great celebration by everyone but his uncle, Scar. Scar has his eyes on the throne and now finds that he must eliminate both his brother and his nephew to gain power.

To tell the story, Taymor utilizes a dazzling vocabulary of visual elements that draws from across the continent of Africa and into the storytelling traditions of the Far East. Shadow puppets and ornate beaded corsets and headdresses sprouting the grasses of the wide savannah sit one alongside the other. A bit of steampunk-inspired mechanics here, the fluid movement of fabric there and the simplest of gestures — a bird-shaped kite twirled on the end of a long pole by a single dancer — transform The Kennedy Center Opera House into something almost unrecognizable.

The show boasts a tremendous touring company that not only features some truly outstanding vocalists in lead roles, but an incredibly strong ensemble. AndrÃ© Jackson and Dan’yelle Williamson make for an elegant Simba and Nala, but the showstopper is Phindile Mkhize as the soothsaying baboon Rafiki. The South African native’s voice calls across time and continents like a roll of gorgeous thunder.

This is, as you might already have guessed, a difficult show from which to maintain a critical distance, though some issues do exist. Sound has a habit of becoming muddy during The Lion King‘s biggest numbers as the acoustics of the room, the size of the cast, and whatever artificial enhancement being used collide. It causes lyrics to simply fuse into an incoherent block.

And while some might feel it is an unfair item to include in a review, the audience is another issue. While their work is seldom recognized in print, special kudos must go to the ushers working a production that seems to be bringing lots of new folks to the theater. Particularly with the seats filled with so many whose heads don’t quite crest the row in front of them, remember that the more times you stand and move about, the more your fellow theatergoers are going to miss.

And The Lion King is something not to be missed.

With area stages filled with Broadway blockbusters, cross-dressing murder mysteries and Internationalist intrigue, leave it to Washington Shakespeare Company to take things in another direction. A bring-a-compass-with-you-to-find-your-way-back kind of different direction.

Red Noses is a comedy about the Black Death, the power of the church, and the fact that a one-legged woman with dreams of becoming a professional dancer is always going to get a laugh.

Yes, that’s politically incorrect. Truthfully, most of the show is.

Father Flote (John C. Bailey) is a monk attempting to minister to those stricken by the plague when a vision shows him that the way to truly help is with humor. What follows is an examination of faith that, at turns, evokes The Wizard of Oz, stories of Christ’s disciples and off-market Monty Python.

Unfortunately, the sideshow production qualities don’t keep the play from dragging a bit and the patience of some theatergoers will be strained. But Bailey is a steady presence and, together with castmates Emily Webb, Heather Haney and Melissa Marie Hmelnicky, leads the ensemble gamely through the play’s intentionally bad burlesque and inoffensive offensive humor.

Red Noses won’t appeal to everyone, but it does offer a distinct change of pace.

The music isn’t original. It’s the ABBA music you know either from the vinyl albums you once played or the greatest hits box set you now own. The story is only original if you don’t count any number of ”who’s the daddy” episodes of The Maury Povich Show. So how is it that Mamma Mia! continues to super troop around the globe to enthusiastic full houses? Because it’s the shiny musical theater equivalent of an ice cream sundae.

While the touring company now at the National Theatre brings with it some genuinely talented performers in lead roles — like Susie McMonagle and Sophie Sheridan as the mother and daughter at the center of the uncertain paternity action — much of the show’s over-the-top production is lost thanks to an ensemble that ranges from the seemingly untrained to the apparently uninterested. Thanking ABBA for the music is all well and good unless you make them regret letting you sing it.