By Randy Shulman on October 17, 2008 @RandyShulman

”IF YOU WANT theoretical freedom, move to this country. If you want real freedom, move to this country and get into politics,” advises Congressman Lawrence Connor (Steven Weber) to Owen Norris (Alex Linz), a 15-year-old whiz kid whom Connor has tapped to help put a youthful stamp on his budding Senate campaign. But as Owen soon learns, those words carry a foreboding weight in this debut feature from 20-year-old writer-director Luke Eberl.

As Owen gets an education in corrupt ethics, he tries to hang on to his ideals. But, as with any tale of corruption, it's not long before his gooey, wide-eyed naiveté is given over to brittle cynicism.

Eberl wants to unsettle and shock us. But his movie misses its mark. It's certainly not the fault of Weber, undeniably creepy as the congressman with pedophilic tendencies, and it's not the fault of Linz, who is, if nothing else, earnest. Nor does blame lie with the gorgeous Escher Holloway, who plays the congressman's ”nephew,” and who befriends Owen with the hopes the relationship will develop into something more meaningful.

The fault lies with Eberl — not for going too far, but for not going far enough. Eberl wants to explore a deviant side of the political mechanism, one whose proclivities are protected by the way the world works, aka ”the system.” But Eberl isn't mature enough to tackle this kind of gutsy material. Choose Connor is ultimately too timid. We squirm a little here and there, yes, but we should be squirming ceaselessly throughout.

The pacing is erratic, edging toward sluggish, and the movie's big revelation is hardly surprising or, for that matter, compelling. But Eberl is clearly a talented young filmmaker and, with a little age and seasoning, will no doubt turn out better works in the years to come. 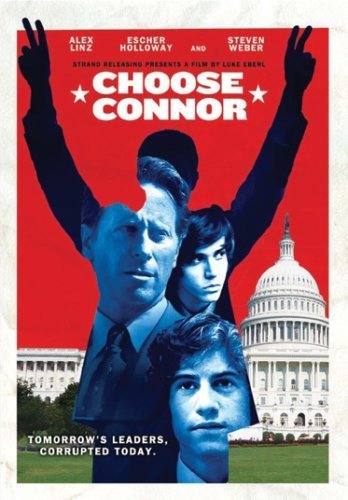