Home / Special Feature / Reel Affirmations / Were the World Mine

Were the World Mine

By Randy Shulman on October 25, 2008 @RandyShulman

THOSE WHO ATTENDED the 2004 Reel Affirmations shorts program ”Growing Up is Hard” might recall an odd 20-minute musical from director Tom Gustafson entitled Fairies.

Turns out Fairies was just the appetizer.

Now it’s time for the entrée.

Gustafson has expanded on his premise with the feature-length Were the World Mine, a beautiful flight of fancy into the mind of Timothy (Tanner Cohen). A gay youth in an all-boys prep school, Timothy deals with the torment he receives from his classmates with a combination of silent strength and mental flights of fancy, in which he envisions the jock-pack bursting into elaborate song and dance.

Dreams become reality when a sly, mischievous drama teacher (Wendy Robie) stages Shakespeare’s A Midsummer Night’s Dream and casts the dulcet-voiced Timothy as Puck. While his single mother struggles with a new job, and Timothy struggles with his feelings for the school’s star rugby player, Jonathon (Nathaniel David Becker), Gustafson lays his groundwork.

At first, we’re not quite certain of the director’s intent — and Gustafson’s early musical scenes are excessively over the top, resembling at times a Bonnie Tyler ’80s music video. While there’s nothing wrong with lean, shirtless boys cavorting with dodgeballs and performing endless cartwheels and pirouettes, it tends to wear on one’s patience.

But fear not. Patience is rewarded midway through when a jaw-dropping plot mechanism turns the film into a real-life magical foray. To reveal more would spoil the utter rush of joy this movie ultimately provides. Let’s just say, what transpires is of grand Shakespearean proportions.

Gustafson has churned out a work of cinematic art — there’s really no other term for it — one that boldly defies convention. It shouldn’t work, but it does — and spectacularly. It grows on you like fresh ivy, and by the final scene, if you’re not grinning ear-to-ear, wholly revitalized by this entrancing, sophisticated movie’s giddy sense of being, you may want to check your pulse.

Were the World Mine 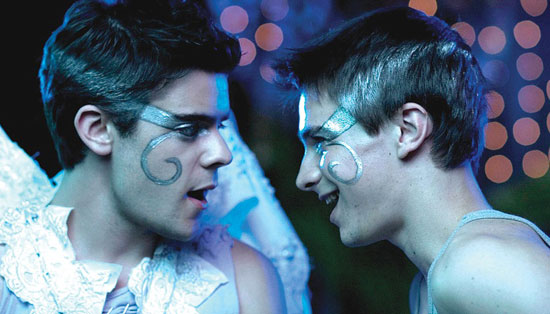 Randy Shulman is Metro Weekly's Publisher and Editor-in-Chief. He can be reached at rshulman@metroweekly.com.
← Previous Story Lez Be Friends
Next Story → An Englishman in New York