Suffering from a disparity of tone, Folger's 'The Winter's Tale' ultimately falls short of its creative goals

The year was 1990. Madonna, decked out in her finest Marie Antoinette drag, hit the stage of the MTV Awards and made a song that many were quite ready to leave behind due to radio play exhaustion fresh and new and deliriously sexy. (Take a few notes, Ms. Katy Perry — you and your circus-girl underpants are really only going to get so far before a collective weariness will cause all and sundry to head for the fridge as you lean forward, a bit tipsy on your girly pink naughtiness, to tell us again how you kissed a girl.)

That’s always been the Material Girl’s strength. The ability to re-imagine, re-cast, re-invent. More than donning a new haircut or simply trading in the 1940s ingÃ©nue suits for Clockwork Orange bowler hats and boy briefs, Madonna has built her vast collection of identities from the music up. There’s a method to the madness. A man (or Madge) behind the curtain. 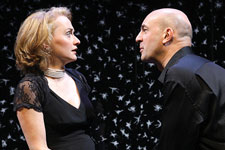 “The Winter’s Tale” at Folger Theatre

Which brings us to the biggest issue plaguing Folger Theatre’s production of Shakespeare’s The Winter’s Tale. The beautiful glass that director Blake Robison’s team of designers has created is half empty. We have immense style, but very little substance. A story within a story, The Winter’s Tale is laid out as a fairy tale being told by a father to his pajama-clad son. Begun on a stage overworked with a pattern that could be either snowflake or splatter, we meet the psychologically teetering King Leontes (Daniel Stewart, son of British Shakespearean actor Patrick). Leontes suspects that his pregnant wife, Hermione (Connan Morrissey), is having an affair with his brother, the ruler of Bohemia. There is no apparent reason for his suspicions and all of his closest allies and advisers — including the forceful Paulina (Naomi Jacobson) — vigorously protest his assertions.

Regardless, Hermione is condemned to prison by Leontes where she gives birth to a daughter. Leontes banishes the baby from the kingdom and a chain of events that would make the plot of any Aaron Spelling prime-time soap opera seem pedestrian is set into motion.

Giving full and proper credit where it is due, Stewart gives the complex character of Leontes a satisfying depth. We see a cold calculation as bitter as any Midwest winter broken with jolting flares of red-hot temper. The actor maneuvers brilliantly through the maze of emotions while maintaining both a humanity and a spontaneity that gives his work a polished but almost unrehearsed quality.

Praise should also be given to Jacobson for her Paulina. In a time where powerful women are more the rule than the exception, Jacobson’s Paulina seems convincingly plucked from the contemporary stage of international politics. It’s a focused and brilliantly honed performance that brings Shakespeare’s words dynamically into the modern setting of Robison’s interpretation.

That setting, and the more successful aspects of the show’s overall production, is owed largely to the work of Kate Turner-Walker’s costumes (or at least half of them), Matthew M. Nielson’s sound design and Kenton Yeager’s painterly lighting work. Playing off a visual language that is most coherent when unfolded in blacks and grays, Yeager threads glowing reds and yellows that span from soured milk (to accent Leontes’ descent to madness) to the rich glow of Bohemia’s sunshine. Nielson crafts an equally rich palette with an intelligent aural canvas drawn from the Middle East.

Turner-Walker’s best work happens when she’s outfitting Leontes and the citizens of his kingdom, Sicilia. Outfitted in clean lines and tailored pieces, the minimalism of the approach is perfectly executed and supports the stage work of the actors. This is less the case with the presentation of Bohemia, which seems stolen from the trunks of a touring company of Li’l Abner. True, this is a story presented as a child’s fairy tale and the counterpoint to Sicilia could work (as it does with Turner-Walker’s Bohemian designs for the king’s brother and Camillo), but the costuming feels overdone and drawn from an entirely different world than what the audience has come to know. These are more than two countries. These are two entirely unconnected visions.

And it is this disparity that disrupts The Winter’s Tale. The movement from tone to tone, environment to environment, should not include the dismissal of finish and refinement. Among the actors the sense of craft is lost to clowning and that clowning seems more intended to distract the audience from a structure that is not there. A pair of stylized circus panties to make up for a lack of polish.

It’s not that there is any single great failure occurring here (veering most closely is Morrissey whose Hermione feels forced and uncomfortable). Most of the performers offer an enjoyable, though not particularly inspiring, collection of performances. But there are such flashes of creative strength and sure-minded execution that ”doing fine” ends up falling quite short.

The Winter’s Tale is clearly working toward being something keen and imaginative. Unfortunately, the production lacks enough foundation to prevent it from blowing away like so many unsubstantial, though lovely, flakes of snow.