Contestants to compete next weekend for four Capital Pride titles

Two years ago, a drag king was crowned Mr. Capital Pride, and drag queens generally reign as Miss Capital Pride. But either contest ”is certainly open to anyone, male or female, who wants to compete for that title,” says Robert York. As long as they play the part of mister or miss. ”And as long as they’re United States citizens over the age of 21,” York teases.

As head of Cocker Productions, York puts on the Pride pageants, which also includes contests for Mr. and Ms. Capital Pride Leather. He’s actually been helping out with the pageants for over 10 years, counting when he served as director of Capital Pride. 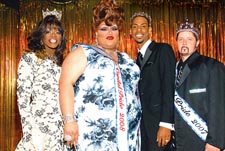 ”The four people who win the titles represent our community in a variety of ways,” says York. “They really work to rally the community for support and ongoing fundraising efforts.”

The reigning Jim Rinefierd and Girl Skye will serve as judges at the leather pageant, which this year takes place at Cobalt. Rinefierd, a runner-up at D.C.’s Mr. Mid-Atlantic Leather, and Skye will help select their successors in categories including cruise wear, physique and formal leather.

Town, meanwhile, plays host to the Mr. and Miss Capital Pride pageant, and Maria Roman, one of the stars of the 2006 documentary Trantasia, will serve as a special guest judge. York is expecting ”a record number of contestants” — as many as double the previous record of 10. They’ll compete in categories including onstage interview, pride attire and talent. ”We’re really hoping that this year contestants incorporate the 40th anniversary of Stonewall into their pride attire,” says York.

”[Expect] a great evening of fun,” concludes York. “And always expect the unexpected, especially with the pride-attire category.”