Rep. Frank questions the purpose of Get Equal's ENDA protest in House committee, but group's co-founder says they need to see action on job protections

”What a stupid thing to do.”

Those were the first words an agitated Rep. Barney Frank (D-Mass.) spit out when commenting on the Get Equal protest that happened Wednesday morning, April 21, at a meeting of the House Education and Labor Committee. 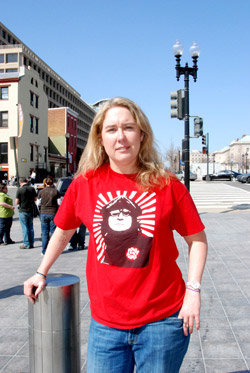 On Sunday, the openly gay Frank said the committee would be marking up and voting on the Employment Non-Discrimination Act (ENDA) ”this week or next.” The activists, led by Get Equal co-founder Robin McGehee, weren’t waiting. Signs and markers in hand, they walked right up the aisle of the hearing room on Wednesday to Chairman George Miller (D-Calif.), offering him a marker to mark up the bill right then.

Frank called the action ”immature, tacky” behavior on Wednesday afternoon and said that ”George Miller and others are working hard” to see the bill passed in the House.

When asked what she would say to Frank, McGehee replied simply, ”Prove us wrong, and make it happen.”

The action, which Frank said was ”no help whatsoever,” fell on the same day that the National Center for Lesbian Rights, National Center for Transgender Equality, National Gay and Lesbian Task Force and the Human Rights Campaign joined with more than 200 LGBT, faith, labor and civil rights leaders and organizations in sending a one-sentence statement to Congress: ”Pass the Employment Non-Discrimination Act NOW.”

Frank said, ”I understand people are frustrated and angry,” but he ”genuinely” didn’t understand the purpose of the Get Equal protest.

”How does this help us get the bill passed?” he asked. ”Who’s mind are they going to change?”

Frank, who recently turned 70 and whose blunt rhetoric actually matches his reputation, has found in McGehee an advocate half his age who shares the quick wit, yet puts a softer edge on her toughest points.

Metro Weekly spoke with McGehee on Wednesday evening after she spent hours in a courtroom as her fellow Get Equal activists were arraigned and released for their White House protest on Tuesday regarding insufficient action on repealing the ”Don’t Ask, Don’t Tell” policy.

”There’s a lot of actors in the political process,” she said, ”from the grassroots activists, to someone who just puts a check in the mail, to our leaders of organizations to elected officials.”

Frank, however, doesn’t see that as answer. He sees a bill so very close to passage and said, ”What I wish these people would do . . . is lobby members to help them vote with us.”

Those methods, McGehee countered, are insufficient.

”This is a man who says our movement needs to use the tactics of the NRA,” she said. ”Well, the NRA uses tactics that don’t only involve lobbying and phone banking.”

McGhee pointed to precedent on Capitol Hill itself.

”He serves with Nancy Pelosi, who has done the same type of disruptive action in regards to equal pay . . . I’d ask him, ‘Would you call her naïve and immature?”’

McGehee was referring to an incident that happened October 27, 1999, when 10 Democratic congresswomen entered a Senate Foreign Relations hearing chaired by Sen. Jesse Helms (R-N.C.) – with posters – to protest inaction on a civil-rights issue – the ratification of the 1979 United Nations Convention to Eliminate All Forms of Discrimination Against Women (CEDAW).

Of Pelosi’s involvement in the action, in which the House members were escorted out of the hearing room by the Capitol Police, McGehee said, ”She called Jesse Helms out. She spread a message of urgency . . . and that’s no different than what I am trying to do and what the other Get Equal members did.

”Everything we do, we do respectfully,” McGehee said. ”We have to disrupt, because we don’t have the access to power.”

McGehee also took aim directly at Frank: ”I would say, from his position of power, as an openly gay man, who is serving his community well . . . he may no longer be able to identify with those suffering with fear of job loss or other problems because of their identity.”

The third – and final – openly gay member of Congress, Rep. Jared Polis (D-Calif.), sits on the Education and Labor Committee. From video of the disruption, he appeared to help end it by escorting the activists out of the committee hearing room and leaving with them. Out in the hall, he talked with Get Eq ual members about his view of the current behind-the-scenes maneuvering going on with the bill.

Showing that neither Frank nor Polis can simply tell Get Equal’s members the proper way to move legislation forward, they openly and loudly disputed Polis’ stated strategy.

On Wednesday evening, McGehee explained precisely why Get Equal confronted a supportive committee chairman at a time when members of Congress are saying a mark-up could come in his committee any day now.

”We’ve waited too long already. … We have been promised since last year and, since the ’90s, that we were going to have employment protections put in place. And yet, we still don’t have it on the House floor.”