Naked Boys Singing! surprises you with its substance and delivery, while Perez Hilton is a big musical fizzle

There are two ways that this can go.

This review could spend a lot of time framing Ganymede Arts’ new production of the musical review Naked Boys Singing! as being all about art and liberation and a celebration of the diverse men’s bodies they have chosen to bring to the stage. Discussion could be had about how many of the show’s songs will be all the more comical to those for whom there is no better pastime than connecting one musical to another. 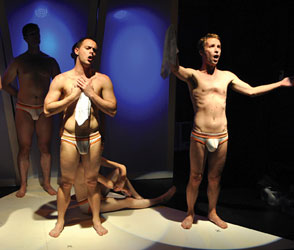 (If you were trying to remember, that would be: ”Pop. Six. Squish. Uh-Oh. Cicero. Lipshitz!” Surprisingly, those lyrics would have worked well too.)

But all that would perhaps be something of an exercise useful to only a limited audience. After all, it’s a show called Naked Boys Singing! and it is what it says it is. Any doubts that it might be otherwise are quickly put to rest by the show’s opening number, an all singing, all dancing, all very naked bit called ”Gratuitous Nudity.”

Yes, it’s a show where putting on a bathrobe or a towel is considered a costume change and the full-frontal male nudity is going to be more of a siren call than any discussion of the fine performances onstage.

Performances like Jonathan Simmonds in the aforementioned ”Radio” song. In Simmonds, a sweet, beautifully clear voice is joined by a naïve comic timing that results in great humor.

Although, truth be told, it’s difficult to select one clear standout in this tight ensemble cast. (No. None of that was really intentional, but trying to avoid the double entendres when discussing this show is getting hard. See?) It’s clear the level of attention director Jeffrey Johnson gave to assembling the troupe for this show and it’s work that’s definitely paying off.

So, when all is said and done, we end up right back where we started. There are two ways to talk about Ganymede’s production of Naked Boys Singing! We can talk about the clever music and the fine performances, and suggest it’s the kind of show that will surprise you with its substance and delivery.

Or, we can simply restate the title. Naked Boys Singing!

You can decide later why it is that you’re going to go.

It’s that time of year again. Schools are in their final weeks which means that parents and aunts and uncles around the region are heading off to those end-of-year programs. Some will marvel at what a remarkably convincing Tevya 9-year old Susan made. Others will do hard time in those folding metal chairs. They will grin and bear their way through a nursery rhyme or simple children’s song that some clever kitchen table playwright has extended into a two-act play with an intermission.

Landless Theatre Co. has, unfortunately, landed in a variation of the latter category with Perez Hilton Saves the Universe (or at least the greater Los Angeles area). An overly extended one-liner that shows some promise in its opening songs, the musical Perez manages to simultaneously be far more politically incorrect and far less funny than its namesake.

In case you’re wondering, the show (not unlike Naked Boys Singing!) really is what the title suggests. Mu slim terrorists are out to destroy the world and it’s up to Perez Hilton to save the day.

Yep. That’s it. That’s what we’re working with.

Except, there really is some potential to the idea and the folks at Landless put on their best game faces – or, at least, celebrity garb – to try and make it happen. Andrew Lloyd Baughman, playing the pink haired online gossipmonger, muscles some of the lackluster songbook into shape. He’s actually makes fine work of the opening ”Perez Sez” and even earns some deserved laughs with ”Perez’s Dream.”

Nora Palka also offers a bright moment or too as Perez’s beleaguered assistant. Blessed with a lovely voice, Palka delivers what might be the evening’s most successful song — ”The Assistant” — with grace and genuine style.

But what might be the makings of a good sketch or two is simply not enough to deliver as a full-on musical. Particularly not one that chooses to reprise not one but two of its songs (and of those boasting all the subtle humor of frat house kegger) or decides to earn laughs by naming one of its terrorist characters Kebab.

Writers Randy Blair, Timothy Michael Drucker and lyricist Zach Redler set out to write a musical where Perez Hilton saved the universe (or at least the greater Los Angeles area). What they created is a musical that even the up-for-anything, gonzo crew over at Landless Theatre Co. couldn’t bring back from the brink.