News Analysis: As President Obama signs bill to end military's discriminatory policy, he tells the audience – and the country – that ''we are not a nation that says, 'don't ask, don't tell''' 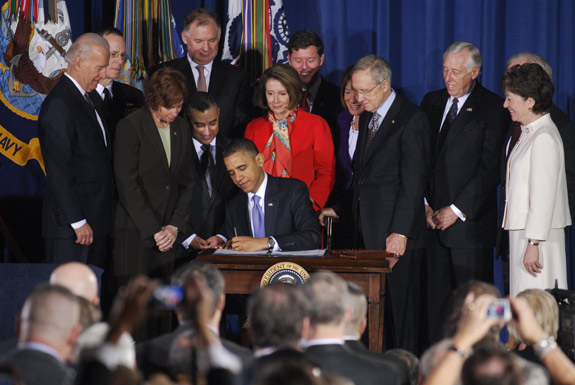 At a little past 9 a.m. Dec. 22, President Barack Obama signed the Don’t Ask, Don’t Tell Repeal Act of 2010 into law in a ceremony full of pomp and circumstance but also full of significance and sentiment.

Saying that he already had discussed the implementation plan with Defense Secretary Robert Gates; Adm. Mike Mullen, the chairman of the Joint Chiefs of Staff; and the various service chiefs, Obama said the implementation would be done “swiftly and efficiently.”

Talking about the importance of recruiting and enlisting the best men and women possible for the Armed Forces, Obama said, “That’s why I hope those soldiers, sailors, airmen, Marines and Coast Guardsmen who have been discharged under this discriminatory policy will seek to reenlist once the repeal is implemented.”

At the press briefing later Dec. 22, White House spokesman Robert Gibbs said that the timeframe for when those out gay, lesbian and bisexual would-be servicemembers could re-enlist was a matter of “months, not years.”

But the commander-in-chief, whose relationship with the LGBT community has been sometimes tense and on occasion acrimonious, returned to what even some of his fiercest critics acknowledged was a position — at least for the day — as the “fierce advocate” he had told the community he would be.

Telling the story of a gay servicemember, Andy Lee, who saved the life of a fellow soldier, Lloyd Corwin, in World War II, Obama shared just one of the countless stories of heroism to have come to light during the fight to repeal the 1993 law banning open gay, lesbian and bisexual military service.

The presidential signing ceremony for the repeal bill was held in the auditorium at the Interior Department in order to allow for a number of guests. Among the attendees were Grethe Cammermeyer, a former colonel on the Washington National Guard who led the audience in the Pledge of Allegiance and told reporters after the signing that she “felt a little bit like the grandmother of the cause.”

In addition to members of Congress who were there, notable attendees included the leadership of organizations involved in repeal — including the Human Rights Campaign, Servicemembers Legal Defense Network, Palm Center, Servicemembers United, National Stonewall Democrats, Log Cabin Republicans, Center for American Progress, OutServe and Get Equal.

Franklin Kameny, a World War II veteran like Lee and Corwin, had protested for open military service since his firing in the late 1950s from the Army Map Service because he was gay. He told Metro Weekly he was overjoyed to be attending because, as he said, “I didn’t think I’d live to see it.”

To them and many others, Obama said, “For a long time your service has demanded a particular kind of sacrifice. You’ve been asked to carry the added burden of secrecy and isolation. You’re not the first to have carried this burden, for while today marks the end of a particular struggle that has lasted almost two decades, this is a moment more than two centuries in the making.”

The vote that brought about the signing, however, was not a close one.

With 63 senators on one side and 33 senators on the other – and four not voting – the outcome was clear a little before noon Saturday, Dec. 18. Although not the final vote on the matter, which received two more affirmative votes, DADT had reached its end when the Senate voted for cloture on a stand-alone bill to repeal the policy.

A little more than 17 years earlier, 63 senators also had faced off against 33 opposing senators – with four, again, not voting. Then, as today, it was not the final vote on the matter. Then, however, the vote made clear that the U.S. government would be passing a law banning openly gay, lesbian and bisexual service.

Sen. Barbara Boxer (D-Calif.) had attempted to remove DADT from the National Defense Authorization Act by replacing it with language leaving the decision about the policy ”concerning homosexuality in the Armed Forces” up to the president.

But, the measure failed. Overwhelmingly.

Less than 20 years later, though, the Senate had flipped 180 degrees on the matter.

How did it happen?

The successful Senate vote happened, first, because of an unmatched – and ultimately successful – public education campaign by LGBT advocacy groups and activists and supportive academics. Saying that other efforts could benefit from the lessons of the DADT repeal effort, Mara Keisling from the National Center for Transgender Equality told Metro Weekly that the bottom line was that they ”did a really good job of making it an issue.”

From the long-established entities like SLDN and the Palm Center to newer groups like Servicemembers United and even OutServe, no reporter (or senator) was ever without an informed voice – often a former or even current servicemember – willing to explain the precise impact of the discriminatory policy.

On the same day in March of this year, former Air Force Major Mike Almy, an SLDN client, was testifying before the Senate Armed Services Committee as former Army Lt. Dan Choi was, with Get Equal, raising the stakes for the White House in a way no one had yet done to the administration.

That awareness-raising effort — including the unprecedented netroots efforts to push the issue and the shove provided by the LCR lawsuit this fall — was essential to keeping DADT repeal on the front burner at the White House, in Congress and in the media. The education brought public opinion around, and it allowed an open discussion based on facts – and not fears.

That, though, was only half of the battle.

The other half was less pretty – and much less thankful. The end of the military’s discriminatory policy against gay, lesbian and bisexual servicemembers also is happening because of a smart, determined political strategy by the White House, Senate Armed Services Committee chairman Carl Levin (D-Mich.), Sen. Joseph Lieberman (I-Conn.), Rep. Patrick Murphy (D-Pa.) and the ”insider” LGBT organizations that have received the ire from many at the forefront of the first necessary part of the strategy that reached its success on Dec. 18.

With the support of Reid and Speaker Nancy Pelosi (D-Calif.), the strategy of attaching repeal to the National Defense Authorization Act was the only way forward in the spring and summer. Moreover, repeal would not have even gotten off the ground had members of Congress not believed that the president – and the leadership at the Pentagon – was behind the effort.

To that end, Jan. 27 – the date that Obama said in the State of the Union address that he would ”work with Congress and our military to finally repeal the [DADT] law” – and Feb. 2 – the date that Defense Secretary Robert Gates and Adm. Mike Mullen, the chairman of the Joint Chiefs of Staff, told the Senate that they supported repeal – were the keys to all that followed in Congress.

But, as Winnie Stachelberg, a longtime LGBT advocate who is the senior vice president at CAP, said in the moments after the cloture vote, ”Undoing a law is always a difficult prospect and procedure.” Part of that difficulty, as was seen in recent weeks, is because the specific concerns of every lawmaker whose vote was needed had to be answered.

Stachelberg, who has been a part of most of the White House meetings with pro-repeal organizations throughout the year, has been criticized – along with HRC and its president, Joe Solmonese – by some activists, and even some other groups, as being too cozy with the administration. Stachelberg and CAP faced fire for their role in crafting the language in the repeal bill that puts final repeal in the hands of the president and military leaders with a certification requirement.

That certification requirement, the formation of the Pentagon working group and the resulting working group report released Nov. 30, though, were some of the very same ”insider” compromises that allowed the bill to move forward in May and brought along many of the moderate votes for cloture on the stand-alone repeal bill on Dec. 18. Without the flexibility of the certification language, judging by the testimony of Sen. Jim Webb (D-Va.) on the floor of the Senate in the debate hours before the vote, his vote – which was against repeal in May – likely would have remained in opposition.

But Webb didn’t, instead voting for cloture and, later on Dec. 18, for final passage of DADT repeal. He was joined in the final vote by all of the other Democrats voting – Sen. Joe Manchin (D-W.V.) did not vote at all – and eight Republicans.

As Rachel Maddow – who has been critical of Obama on this issue – said on MSNBC after the vote, ”This is the president’s victory. … This is a difficult promise kept.”

As Obama reached the end of his speech at the signing ceremony, he noted the turning point that the bill marks in history, saying, ”For we are not a nation that says, ‘don’t ask, don’t tell.”’

The line brought the audience to its feet.

Sitting down, he did so. He then looked up at the audience gathered together to watch this moment.

“This is done,” the commander-in-chief said.