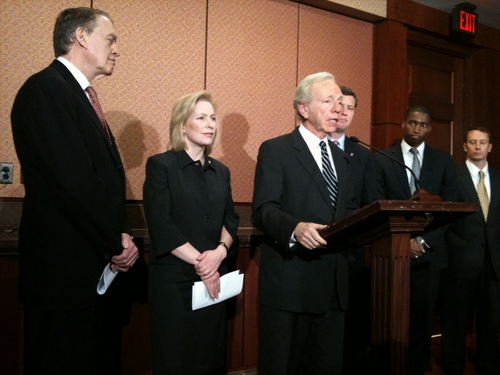 Referring to the prospect of senators claiming that the process is forcing them to vote “no” on cloture on Saturday, Lieberman pointed to the fact that the bill is only “four or five pages” and said, “I just don’t think that it’s going to be credible for anybody to say, ‘For a technical, procedural reason even though I support the principle, I’m not going to vote for it.'”

Lieberman was asked about several senators whose votes have been in question recently, including Democratic Sens. Kent Conrad (D-N.D.) (see here) and Joe Manchin (D-W.V.), who could potentially vote “no” on Saturday, and Sen. Ron Wyden (D-Ore.), who has surgery on Monday for recently diagnosed prostate cancer. Lieberman did not comment directly on how Conrad or Manchin would vote but said that Wyden would be in the Senate on Saturday to support repeal.

Of note, Lieberman said that should the cloture vote succeed in reaching the required 60 votes, he “hope[s]” that “we may reason together and … perhaps get to final passage tomorrow by the end of the day.”

Gillibrand also jumped in at the end to say that the Democrats had “asked Sen. Lieberman to take the lead” because of his position “[a]s the senior member of the Armed Services Committee.”

The full Q-and-A portion follows below the jump.

[UPDATE @ 5:30 PM: Sen. Bob Corker (R-Tenn.) threatened on the floor of the Senate to pull his support for the New START nuclear arms treaty with Russia because of the fact that Senate Majority Leader Harry Reid (D-Nev.) was bringing DADT repeal and the DREAM Act for a vote.

Although Sens. John McCain (R-Ariz.) and Jon Kyl (R-Ariz.) — who have been the lead on opposition to DADT repeal and the START treaty, respectively, in the Senate — distanced themselves from his comments, Corker’s speech showed the length to which some Republicans are considering going to stop the DADT repeal vote from happening on Saturday. Igor Volsky from the Wonk Room has been covering this development throughout the afternoon.

More on this development from The Hill and The Washington Post‘s Plum Line, whose Greg Sargent reported after Corker’s speech, “Corker just called back to clarify that a DADT vote won’t lead his GOP colleages to oppose START permanently.”]

[Note: Questions are summarized for reader ease. Answers are verbatim.]

Question: Has anyone said they will not vote for cloture because of the amendment process?

Lieberman: No. Senator Reid … has decided that he would bring it up, there will be no amendments allows. I’ve reached out to my Republican colleagues who have thus far expressed support of repealing DADT. So far, this morning I’ve only been able to reach two, but that is enough.

I’m sure they’d say it to you, so I will say it: Sen. Collins and Sen. Murkowski both said they will vote for cloture. Although both of them wanted there to be a number of amendments allowed on the defense authorization bill, they said that was very different because it was a big bill — 900 pages — and there ought to be free and reasonable debate.

The repeal of “Don’t Ask, Don’t Tell,” at this point, I think, is four or five pages. The bill … was written in close consultation with the Pentagon. And, essentially, both Sen. Colins and Sen. Murkowksi said, ‘Anybody who’s against the bill now will have a full opportunity to speak against it, but you ought not to give people opportunity to delay it further or try to pass an amendment that would effectively kill the bill because it would force it to go back to the House.'”

So, so far so good. And I think those two have been leaders on this, so I think they’ll probably have an effect on the other Republicans as well. I continue to believe that we’re going to end up with more support on the Republican side than the four that we have talked about, and that’s very encouraging.

Question: As to the timing?

Lieberman: It is possible, I’m not predicting anyhting, but if we get over the 60 votes on the cloture vote, which will be in the morning, I hope that we may reason together and decide to yield back some time and perhaps get to final passage tomorrow by the end of the day.

Lieberman (acknowledging that he’s been talking with Conrad): Let’s just say, I’m confident that we’ve got more than 60 votes.

Question: Will the debate time or anything else hold this up?

Lieberman: You know, this has been so much debated. Honestly, the four Republicans who stepped out to say that they would support repeal of “Don’t Ask, Don’t Tell” have shown some courage.

I just don’t think that it’s going to be credible for anybody to say, “For a technical, procedural reason even though I support the principle, I’m not going to vote for it.”

You’ve got to get all your votes — your Senators there, you’ve got to make sure that nobody’s affected by anything extraneous, but right now we’re on a very encouraging path.

Question: What about Sen. Wyden?

Lieberman: Sen. Wyden has said that he will definitely be there. … Here he is facing significant surgery, we’re all optimistic about it. But, he knows that his vote counts tomorrow.

Question: What about Sen. Joe Manchin (D-W.V.), the sole Democrat to vote against the motion to proceed to debate on the Nation Defense Authorization Act?

Lieberman: We’ve talked and we’re going to continue to talk, so I think I should let Sen. Manchin speak to that. I think part of it is that this came on pretty early and quickly in his service.

Secretary [of Defense Robert] Gates and Adm. [Mike] Mullen could not have been more clear as this has gone on, they want this legislation passed now because if it’s not, they fear that a court could come along and tell them what to do and when to do it.

That’s the argument I’m making to Sen. Manchin, and I think we have a shot — but I’m not counting him in our count.

Question: Some have made an issue that it’s an independent and a Republican taking the lead on this bill — and not any of the Democrats. Although Sen. Gillibrand is here today, do you have anything to say to that?

Gillibrand: This issue is so important to so many of the Democrats — both [Sen.] Mark Udall [(D-Colo.)] and I have been working very hard — but we asked Sen. Lieberman to take the lead. He brings and commands so much respect both with the Democrats and with the Republicans

As the senior member of the Armed Services Committee, we could think of no better person to be the leading voice for this bill, and that’s why we asked him to take the lead from the very beginning.

Lieberman: What Kirsten is saying, is that because I’m so much older than she is —