Adm. Mike Mullen, the chairman of the Joint Chiefs of Staff who in February told the Senate Armed Services Committee that his personal opinion was that ”Don’t Ask, Don’t Tell” should be repealed, on Thursday, Dec. 2, added to that response, telling the senators, ”I did not know it as a fact; now I do. What was then my personal opinion is now my professional view.” 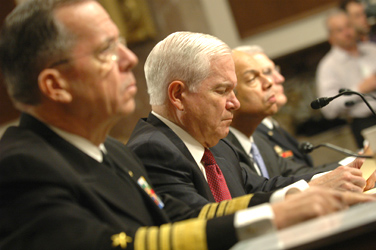 Mullen, Gates, Johnson and Ham at the hearing
(Photo by Ward Morrison)

While attacking the ”corrosive” long-term effects of the military’s policy banning openly gay and lesbian service, Mullen told the committee, ”Repeal of this law … strengthens us. It will better ally those organizational values we claim with our practice.”

Johnson made a ”plea” to the senators to take legislative action to end DADT this year – a view echoed by Ham, Mullen and Gates throughout the hearing.

The most heated moment of the morning came when Sen. John McCain (R-Ariz.), the leading opponent of repeal, questioned Mullen about what he characterized as the report’s failure to ”ask the question” to servicemembers of whether they want DADT repealed.

”Leadership is soliciting the views of your subordinates,” McCain told Mullen, ”and thereby you’re able to carry out your mission.”

Mullen disagreed with McCain’s assessment, telling him, ”I think the report has spoken to, in great part, their views of whether this can be successfully done or not.”

McCain asked Mullen, ”Why wouldn’t we just ask the question?” Mullen replied, ”I fundamentally sir, think it’s an incredibly bad precedent to ask them about – to essentially vote on a policy.”

”It’s not voting sir,” McCain retorted. “It’s asking their views,” stressing – several more times – various iterations of the ”asking their views” refrain before Mullen told him, ”We’ve gotten in great part their views as a result of this survey.”

McCain’s remarks notwithstanding, the response on Thursday suggested that Johnson’s plea for legislative action was one that a majority of the senators from both sides of the aisle were willing to take up. Sen. Susan Collins (R-Maine) sounded very supportive of repeal in her comments and questions, and Sen. Scott Brown (R-Mass.) took a studious position without revealing whether he supported or opposed repeal. None of the Democrats expressed opposition, although the votes of Sens. Jim Webb (D-Va.) and Joe Manchin (D-W.V.) are unknown.

Outside of the committee, however, questions remained about whether and when Majority Leader Harry Reid (D-Nev.) would call up the National Defense Authorization Act that contains DADT repeal for debate and, if so, whether any Republicans will join most of the Democrats in voting to debate the bill.

Prefacing his remarks as coming from ”the lawyer for the Defense Department,” Johnson spoke extensively about the current state of the law with regards to DADT – talking about that ”uncertainty” experienced because of the Log Cabin Republicans v. United States injunction in October. He said that legislative action was the only way to ensure proper implementation of repeal. ”Judicial fiat,” he said, will not allow for ”orderly and responsible” implementation of repeal.

The hearings into the report – which centered around the troops’ views about repeal, the court cases challenging the DADT policy and the legislative action being considered – contained few genuine surprises.

One of the significant developments, however, came from Ham, who had not previously given his personal view of repeal. Asked whether he personal supports repeal, he at first paused, then referenced the legal environment, and said, ”Personally, I think it is time to move from debate and discussion to … implementation.”

Also, significantly, Webb – who served as the secretary of the Navy under President Reagan – praised the report as ”an incredible piece of work” and expressed appreciation that the job was done ”without politicizing the troops.”

In addition to McCain’s focus on the questions asked in the survey of troops, McCain, along with Sens. James Inhofe (R-Okla.) and Scott Brown (R-Mass.), focused on the response rate to the survey, which was about 28 percent.

At several points, those testifying told the senators that the response rate fit with the historical response rate of other military surveys. After the hearing, the Palm Center also released a statement from a dozen current and former faculty at service academies or military universities noting that ”response rates have nothing to do with the validity of a survey’s results, as long as the sample size is large enough and sampling is done properly. In this case, the Working Group survey has a margin of error of plus or minus 1 percent, much better than most surveys.”

Gates, later in the hearings, addressed questions raised by some senators about the slight disruption to the force that the report concludes will occur if DADT is repealed.

Talking about the history of ending discriminatory policies in the military, Gates said, ”Integration of the force took place over five years, … and [the military] had serious racial issues” when integrating the force. As for women servicemembers, he said, ”We have a continuing problem with sexual assault.

”I think the report is honest in saying we will have some disruption [if DADT is repealed],” he said, adding, ”It’s a matter of leadership and training to implement this.”

Testimony from the vice chairman, James Cartwright, and the various service branch chiefs is scheduled for Friday morning, Dec. 3. Previewing their comments, Mullen said that, while the service chiefs have differing views on whether DADT should be repealed, ”All six of us [the service chiefs and vice chairman] agree that the implementation plan is a very, very solid way ahead.”

View a gallery of photographs from Thursday’s and Friday’s hearings by Ward Morrison.