Start off 2011 on good financial footing

Maybe you’ll be giving up smoking or dropping a few pounds. It’s that time of year – the beginning – when the months ahead seem full of positive potential and can-do gusto. But that enthusiasm doesn’t always direct itself to where it arguably should: money. 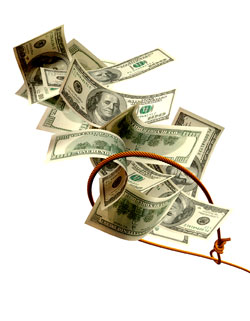 ”People spend more time planning for vacation than they do on their own personal finances,” says Joe Kapp, former president of the Capital Area Gay & Lesbian Chamber of Commerce and an independent agent with Lincoln Financial Advisors. ”Take one day out of the year to revisit overall asset allocation. The biggest obstacle for reaching goals in procrastination.”

Maybe managing your finances isn’t as much fun as transforming your body into a 10 percent-body-fat sex machine, when it comes to 2011 goals, but the results are likely to last longer.

David Taube, CEO and chief investment officer of Kalorama Wealth Strategies, has a list of instructions for making one’s finances as tone and fit as that long-sought hot bod.

”This includes building an emergency fund,” he says, noting that it’s the best way to avoid making difficult decisions under duress. Also, pay attention to your retirement plans.

”For retirement, contribute as much as possible as early as you can to benefit from the magic of compounding,” says Taube. If your employer contributes matching funds to your account, you should be contributing at least the amount your employer matches: ”A dollar-for-dollar match equals a rate of return of 100 percent – and nothing beats free money.”

Another thing to watch is your use of credit, says Taube, emphasizing that paying on time is the largest factor in determining your credit score. And be responsible in your borrowing: ”Credit should be viewed as a convenience, not a source of funds.”

As the economy evolves and the likelihood of an employer providing matching funds may be heading for extinction, much like the generous pensions of yesteryear, it’s worth repeating that starting young counts – exponentially. And while you’re preparing all your tax documents, this time of year is an obvious fit for finances.

”This is a great time of year to do it,” says Kapp. ”January is not just for looking at what you should be doing, but what disciplines to put in place to make those things happen. Look at making sure between now and April 15 you have enough money to fund your Roth IRA or other IRA plans. Put things on autopilot. Set up automatic contributions to your 401K. Have savings automatically taken out.”

Another consideration is professional help. There are several types of professionals to choose from – stock brokers, financial planners, accountants – but Kapp adds that financial nuance can be even trickier for gay people, meaning more reason to seek help. He points to federal estate taxes, for example. Think low estate taxes are designed for the likes of Paris Hilton alone? Consider the same-sex couple who have owned a house for a couple decades. If they were straight and married, the surviving spouse simply loses a spouse. For the gay couple, the surviving spouse loses a spouse and ”inherits” the house she’s been living in for ages – and can be hit with a whopping estate-tax bill as a result.

”The most important thing in all of this is to take the first step,” says Kapp. ”Anyone can take that first step. Then it’s follow-through. What is the next step? It’s about execution. How are you going to go ahead? Hope is not a strategy. Hold yourself accountable.”