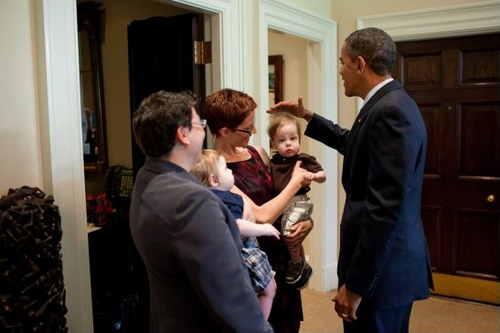 Former associate White House counsel Alison Nathan, an out lesbian, was nominated today by President Barack Obama for a judgeship on the U.S. District Court for the Southern District of New York.

In a statement from the White House, Obama said, “Alison Nathan is a distinguished individual who has demonstrated an unwavering commitment to justice throughout her career. I am grateful for her decision to serve the American people from the District Court bench.”

Reacting to news of the nomination, University of Pennsylvania Law School professor Tobias Wolff told Metro Weekly, “Ali Nathan is one of the most brilliant lawyers whom I have ever had the privilege to know. Her commitment to justice and the rule of law is exemplary. She will do America proud on the federal bench.”

Nathan lives in New York with her partner, Meg Satterthwaite, and their twin sons Oliver and Nathan.

Nathan’s nomination is the second pending and third out LGBT nominee Obama has made to the Southern District of New York. J. Paul Oetken, nominated in January, recently had his confirmation hearing, and Daniel Alter’s nomination was withdrawn. U.S. District Court Judge Deborah Batts, who also sits on the Southern District of New York bench, was the first out LGBT federal judge, following her nomination by President Clinton in 1994.

Additionally, Obama has nominated Edward DuMont to the U.S. Court of Appeals for the Federal Circuit — in both the 111th and now 112th Congresses — but his nomination has not yet been scheduled for a hearing.