DOMA’s Dwindling Defenders — in Congress and Across the Country

On March 3, Rep. Vicky Hartzler, a Republican from Missouri, introduced a resolution purporting to “demand that the Department of Justice continue to defend the Defense of Marriage Act in all instances.”

The move, in response to the Feb. 23 decision by President Barack Obama and DOJ that statutes that classify people based on sexual orientation should be subject to a more searching inquiry – called “heightened scrutiny” – and that, accordingly, Section 3 of DOMA – which creates a federal definition of marriage – is unconstitutional.

Hartzler’s resolution does not leave it at calling for DOJ to defend DOMA. It also takes a swipe at the Patient Protection and Affordable Care Act – referred to by opponents as Obamacare – and referenced Obama’s past statements that, as the resolution states it, “marriage is something sanctified between a man and a woman.” It goes so far as to “condemn[]” what it characterizes as the administration’s “direction” not to defend Section 3 of DOMA in court.

Nearly three weeks after introduction, however, the resolution had less than 100 co-sponsors. The 98 Republicans – and zero Democrats – to sign on in support of the resolution as of the evening of March 22 represent less than half of the Republican caucus.

As Human Rights Campaign spokesman Fred Sainz told Metro Weekly on March 22, “This is a dog of an issue for most Republicans, and most reasonable, politically sophisticated Republicans completely understand that public opinion has shifted way away from these issues.”

Asked if this means Rep. Michele Bachmann (R-Minn.) – a co-sponsor of the resolution – isn’t a “sophisticated politician,” Sainz said, “I am. She is … and I would daresay that the 100 of them that signed on … these are like red-meat folks.” 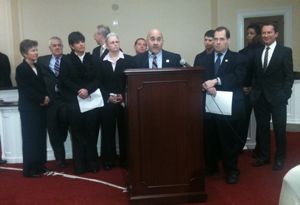 To compare, the Respect for Marriage Act, which would repeal DOMA, was introduced by Rep. Jerrold Nadler (D-N.Y.) on March 16 and already has 108 co-sponsors. Another reference point is the original passage of DOMA in 1996, when 342 members of the House – included many from both parties – voted for the bill (although only 117 co-sponsored the legislation introduced by then-Rep. Bob Barr (R-Ga.)).

The polling question provided specific information detailing only Section 3 of DOMA and asked whether the respondent “favor[s] or oppose[s] the law banning federal recognition of legal marriages.” Section 2 of DOMA, which purports to prevent states from having to recognize same-sex marriages legally performed in other states, was not referenced in the poll’s description of DOMA.

With that caveat, the numbers from the HRC poll, which was conducted in partnership with Greenberg Quinlan Rosner Research, shows that majorities in every age group oppose DOMA and that pluralities in every geographic region oppose the law.

Further, he added, “And every single cross-section of America, when they’re told the benefits that DOMA denies legally married same-sex couples, the numbers go even higher.”

For example, majorities from every age group support providing Social Security survivor benefits for legally married same-sex couples, with nearly three-quarters (74 percent) of those ages 18-29 responding in the affirmative. Even in the least supportive group, those age 65 and older, the support was at 53 percent.

Addiitionally, the survey shows that majorities in every geographic region support protecting spouses from losing their homes in cases of severe medical emergencies or death. The support here ranged from 69 to 70 percent of people in the Northeast, central portion of the country and West and stood at 56 percent of respondents in the South.

Of the failure of the pro-DOMA resolution to pick up much traction – only four members had signed on to the resolution in the previous week – Sainz said, “The data does not support that this is where America is trending. That’s why the Republican leadership, which has to kind of balance the philosophical convictions of some of its members versus what is going to move the country as a whole, has really tried to minimize this issue because they understand that this is not a winner of an issue for them.”

In fact, unlike the resolution put forth by Hartzler, the resolution passed by the Republican leadership to allow the House to intervene in pending DOMA challenges and those leaders’ statements on the matter have been almost completely devoid of any talk of marriage, instead focusing on their claimed duty to defend laws passed by Congress.

[Photo: Evan Wolfson, head of Freedom to Marry, speaks at the introduction of the Respect for Marriage Act on March 16. (Photo by Chris Geidner.)]