This afternoon, a suggestion from outgoing Secretary of Defense Robert Gates that “Don’t Ask, Don’t Tell” certification could come before he is set to leave office at the end of the month. 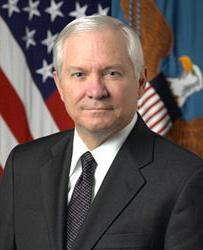 From the Associated Press:

Defense Secretary Robert Gates says he sees no roadblocks to repeal of the ban on gay military members serving openly.

He says if the military chiefs make their recommendation to move forward on the repeal before the end of the month, he will sign it, which would make it effective as early as September.

Clearly, specifics are lacking, and the sentence is not a direct quote, but this interview appears to be the first time that one of the three individuals who must sign the Don’t Ask, Don’t Tell Repeal Act certification — the president, the defense secretary and the chairman of the Joint Chiefs of Staff — has suggested that repeal certification could happen this month.

Nothing, however, has been said about whether the other two — currently Joint Chiefs Chairman Adm. Mike Mullen and President Barack Obama — also would sign certification prior to June 30 if Gates does so.

Under the act, even if they all would sign before June 30, a 60-day congressional review period follows certification before the law — 10 U.S.C. 654 — is removed from the books.

Repeal advocacy groups have been calling for Gates and the others to certify repeal before Gates is to leave office on June 30.

Servicemembers Legal Defense Network executive director Aubrey Sarvis said in a statement, “SLDN is pleased to see Secretary Gates clearly state that he is prepared to certify ‘Don’t Ask, Don’t Tell’ repeal before he leaves his post at the end of the month.

“After nearly six months of preparation and training, we join the Secretary in expressing confidence that the military is, indeed, ready for open service. Hopefully, with the bulk of the training completed in all of the services, the service chiefs are rapidly approaching the point where they can officially recommend to the JCS Chairman Michael Mullen, Secretary Gates, and to the President  that the time has come to make the long anticipated certification,” Sarvis said. “The time to certify ‘Don’t Ask, Don’t Tell’ repeal is on Secretary Gates’ watch.”