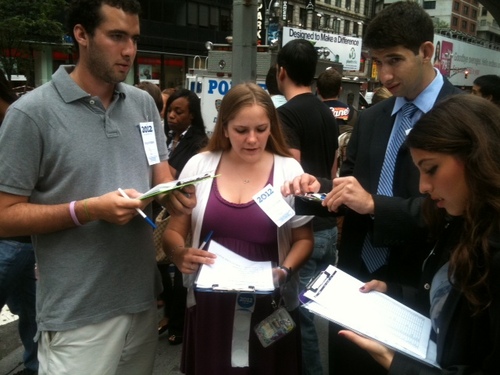 [Obama for America 2012 representatives gather outside the Broadway Theater production of Sister Act on June 23, in preparation for President Obama’s evening visit and remarks at the theater. (Photo by Chris Geidner.)]

As President Barack Obama travels to New York this evening, he will be making three stops — the first at the LGBT Leadership Council Gala at the Sheraton Hotel and Towers just off Broadway and the final at the Broadway production of Sister Act — as part of a campaign swing through the state.

By 4 p.m., the New York City streets in the blocks surrounding the events were clearly showing the security signs of a presidential visit.

From White House press secretary Jay Carney, however, expectations were preemptively dampened for LGBT advocates hoping that the president would come out in favor of marriage equality at the event.

Asked on Air Force One this afternoon about whether Obama would be addressing the New York marriage bill — which is still awaiting action in the state’s Senate — Carney said, according to the transcript, “I’m sure he will mention it and I think make the point that, as he always has, that he believes that this is something that states should be able to decide.  And that’s one of the reasons, because of the — that the President believes that we should withdraw from our participation in DOMA cases, because he believed it was unconstitutional.”

Pressed further about whether he would take a position on the New York marriage bill, Carney said bluntly, “He’s not going to make any new declarations of a position.  He’s simply going to address it.”

Tickets for the LGBT Gala start at $1,250 per person. The cost to serve as a “Chair” at the event — which gets “top billing as Chair on invitation and program, as as well as two priority seats at Gala Dinner, including keynote address by President Obama, and photo with the President for two” — clocks in at $35,800. According to Public Campaign communications director Adam Smith, $30,800 is the maximum contribution an individual can give to a party, and $5,000 is the maximum total contribution an individual can contribute to a candidate — $2,500 for the primary election and $2,500 for the general election.

At the Broadway Theater, where Sister Act is being staged, Obama for America 2012 volunteers crowded the scene by 4 p.m. as ticketholders checked in with security. As Broadway.com earlier reported, “Show producer Whoopi Goldberg, a supporter of the President, will host the evening’s events at the Broadway Theater. Tickets for the show will start at $250; $1,000 will get you an orchestra seat and entry to a pre-show reception with Goldberg, while $10,000 will get you a photo shoot with the President himself.” 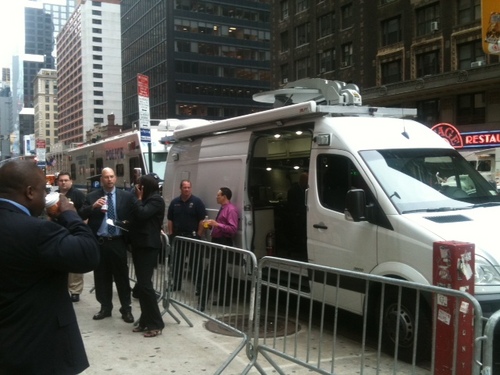