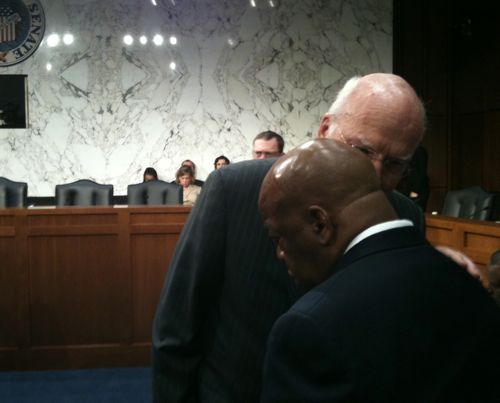 [Photo: Senate Judiciary Committee Chairman Patrick Leahy (D-Vt.) confers with Rep. John Lewis (D-Ga.) before a committee hearing into the Respect for Marriage Act, a bill to repeal the Defense of Marriage Act. Lewis testified at the hearing in support of the RMA. (Photo by Chris Geidner.)]

This morning, the Senate Judiciary Committee is holding a hearing into the Respect for Marriage Act, the bill to repeal the Defense of Marriage Act. A webcast can be found here. Live-tweets here.

Committee Chairman Patrick Leahy (D-Vt.) started off the hearing, welcoming the audience in the packed hearing room in the Hart Senate Office Building to the “first-ever congressional hearing examining a bill to repeal the Defense of Marriage Act.” The Obama administration announced its support for the bill on Tuesday, July 19.

Although he was delayed, the committee’s ranking member, Sen. Chuck Grassley (R-Iowa), eventually got to the hearing and gave a fiery defense of DOMA. Of the name of the repeal bill, the Respect for Marriage Act, Grassley said, “George Orwell would have marveled at the name.”

He later referenced Obama’s support for “traditional marriage” in the 2008 presidential campaign and, incorrectly, said, “Until yesterday, he was a supporter of DOMA.” Although the administration support for a specific bill was new on July 19, Obama had — including during the 2008 campaign — supported the repeal of DOMA.

Lewis, a strong opponent of DOMA in 1996, began his remarks by stating that he found it to be “unbelievable” that a hearing like today’s is still needed in 2011.

“Every person, man or woman, gay or straight is entitled to the same rights,” he said.

Saying that pushing for full marriage equality — and not solely the repeal of DOMA — is needed, Lewis evoked history, saying, “Justice delayed is justice denied.

“These are our brothers and sisters, we cannot turn our back on them,” the civil-rights leader said, telling the lawmakers, “We are called to lead.”

King, on the other hand, strenuously defended DOMA, criticizing the Department of Justice’s failure to defend DOMA in court. He also took aim at the unanimous Iowa Supreme Court ruling that held that marriage equality was required in the state, calling it “lawless.”

Nadler, in addition to detailing his reasons for supporting the RMA, takes a moment to praise his home state’s decision to pass marriage equality.

In his prepared remarks, Nadler noted the dwindling support for DOMA, then said, “DOMA’s supporters still claim that the law should survive, and argue primarily that DOMA serves a legitimate interest in protecting the welfare of children by promoting an ‘optimal’ family structure — one that consists of a married opposite-sex couple raising their biological children. But there is no credible support for the notion that children are better off with opposite-sex parents or that married gay and lesbian parents do not provide an equally loving, supportive, and wholesome environment.”

The second panel is made up of three people impacted by DOMA — Ron Wallen of California, Andrew Sorbo of Connecticut and Susan Murray of Vermont — as well as Focus on the Family vice president Thomas Minnery.

After Minnery claimed that there is a “mountain” of evidence that children are better raised by a mother and father, Sen. Al Franken (D-Minn.) took the chance to pounce on Minnery’s representation of a study.

Of the study’s results, Franken told Minnery, “It actually doesn’t say what you said it says.”

At the end, Sen. Chuck Schumer (D-N.Y.) showed up to give a brief statement and conclude the hearing a little past 12:15 p.m.