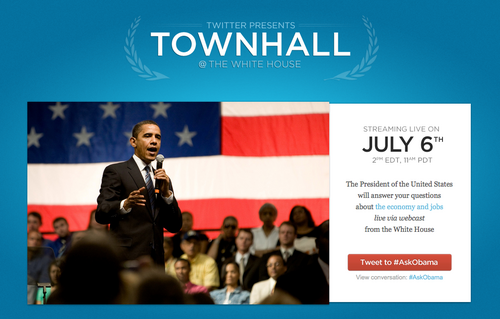 News from the White House today in advance of next week’s planned “Twitter Town Hall.”

WASHINGTON, DC – President Obama will participate in the first ever Twitter Town Hall at the White House on Wednesday, July 6 in the East Room. Twitter co-founder and Executive Chairman Jack Dorsey will moderate a conversation between President Obama and Americans across the country about the economy and jobs.

Twitter users can submit questions using the hashtag #AskObama.  More information from Twitter can be found at the event’s homepage: http://askobama.twitter.com.

An Agence-France Presse article on the Town Hall noted, “One user asked when Obama would support gay marriage, a subject on which the president has said his position is still evolving.”

On June 30, The Wall Street Journal‘s Laura Meckler — who asked Obama twice about his personal views on same-sex marriage at the June 29 news conference — suggested she was going to try again to get the president to answer, saying, “I’ll try a third time on Twitter.”

The page referenced in the advisory is hosted by Twitter and proclaims that “The President of the United States will answer your questions about the economy and jobs live via webcast from the White House.” The link is to the White House page on the economy.

The color and font choices, however, are very close to the current color scheme used by Obama re-election campaign.

White House press secretary Jay Carney was asked on June 30, “Is the campaign at all involved with the town hall next week, or is that his official White House Twitter account that he uses?”

Carney replied, “This is an official event.” 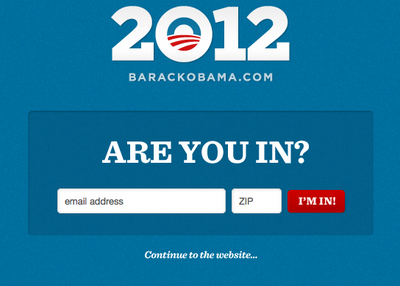 Read the exchange with Meckler below the jump.

Q    And finally, on the Twitter town hall meeting, will the President be giving his responses in 140 characters or less?

MR. CARNEY:  Let me see if I have the details on that.  That’s a good question.  We’ll have to get back to you on how that works.

Q    Will he be speaking or just tweeting?

MR. CARNEY:  Do we know the answer to this?  We’ll have to find out about how this will work.  The Twitter —

MR. CARNEY:  It will be webcast, yes.  So it will be live.  He’ll be speaking.  There will be — questions will come and Twitter oversees the process.  There will be multiple ways that questions will get to the President.  Twitter users will begin asking questions via the AskObama hashtag today.  To identify popular and relevant questions, Twitter is developing a number of ways to identify the most common and representative questions.

Q    So he’s not tweeting.  Others are tweeting the questions.