With additional reporting by John Riley. 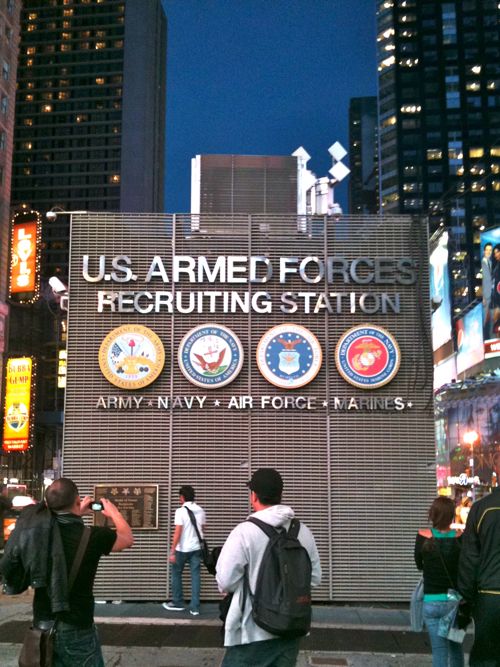 [Photo: The U.S. Armed Forces Recruiting Station in New York City’s Times Square on Sept. 19, 2011, in the hours before the repeal of “Don’t Ask, Don’t Tell.” (Photo by Chris Geidner.)]

Just after midnight, the White House took to Twitter today to announce, “As of 12:01 am, the repeal of the discriminatory law known as ‘Don’t Ask, Don’t Tell’ finally & formally takes effect.”

In the District, celebrations had begun before midnight, with Servicemembers United hosting a countdown party on Monday night, Sept. 19, to mark the 1993 law’s end. Held at Town Danceboutique, the night began like any other. A Kyle Minogue song blared from the speakers, but no one was dancing — yet. Many men and women milled around or sat on couches lining the walls, ordering drinks, chatting with friends, toasting as their glasses clinked together.

A mix of young and old, the crowd also was a mix of fresh crew cuts and spiked, gelled and moussed-up hair. On the screens behind the bar appeared a picture of the American flag with a clock counting down the hours, minutes and seconds until the repeal of the military’s policy banning lesbian, gay and bisexual servicemembers from serving openly.

After a brief announcement by Alex Nicholson and Jarrod Chlapowski of Servicemembers United, the countdown began. As the seconds ticked down to midnight, the crowd was on its feet, chanting.

Then, the crowd shouted with joy. On the video screen, the words flashed over and over: “DADT IS HISTORY.”

The DJ started up the music, and the beat of Lady Gaga’s “Edge of Glory” filled the club.

Parties slated for this evening include Servicemembers Legal Defense Network’s repeal celebration at K Street Lounge beginning at 6 p.m. and the Log Cabin Republicans’ 2011 Spirit of Lincoln Awards Dinner — where they will be recognizing Sen. Susan Collins (R-Maine) and Scott Brown (R-Mass.) for their roles in helping bring about repeal.

But, in between the parties, the capital city slept. Across the globe, however, Air Force Staff Sergeants Ashley Carothers and John Tegeler were going to work.

Stationed in Germany, both are members of OutServe and both served under DADT for the past several years.

Having been in the Air Force since 2004, Tegeler told Metro Weekly he “never thought [he] would be having this conversation” about the end of DADT. In fact, he didn’t really even tell himself he was gay until he already was serving. But, now, he’s co-leading OutServe Germany, which he says has nearly 300 members who identify as gay, lesbian or bisexual and are currently serving in the military.

One of those members is Carothers, who has been in the military for more than six years and spoke with Metro Weekly a little before 9 a.m. local time today in Germany.

“Honestly, back then, I didn’t see [DADT repeal] coming. It was just too far out there,” she says. “Up until two years ago, there was really no sign of light. It was more thinking, ‘My whole career is going to be in hiding.”

But then, President Obama said repealing the law was the “right thing to do” in his State of the Union address in 2010; Adm. Mike Mullen, the chairman of the Joint Chiefs of Staff, told the Senate Armed Services Committee that he believed the issue “comes down to integrity — theirs as individuals and ours as an institution”; and, after months of wrangling and several failed Senate votes, the Don’t Ask, Don’t Tell Repeal Act was passed and signed into law before the end of the year.

Following the July 22 certification required under the repeal act, the law — 10 U.S.C. 654 — is now wiped from the books.

“Gays and lesbians have been serving for years in the military,” Tegeler notes, adding that the difference with repeal is: “Now we will not have to fear reprisal from leadership.”

“Whether they knew it or not, there are so many of us,” Carothers says, noting that more than 70 members of OutServe attended Cologne Pride this summer. She believes most servicemembers will adapt to a post-DADT military with ease but says that even for those who have a problem with it, “The military has been very strict about the DADT [repeal] trainings … so I think, especially here in Europe for the Air Force, the leadership has been quite clear that they will not tolerate anybody discriminating against any gay members.”

Just after midnight, in a news release, SLDN executive director Aubrey Sarvis said, “Our work is far from done, but today we pay tribute to the service and sacrifice of our patriots as we look forward to a new era of military service — one that honors the contributions of all qualified Americans who have served or who wish to serve.”

Or, as Carothers says, “We’re here. We can finally walk around with a smile on our face.”