Today at the White House briefing, Metro Weekly sought clarification about the earlier White House statement regarding the North Carolina marriage amendment slated for the ballot there in May 2012, as well as asking about whether President Obama had any plans to mark the Sept. 20 “Don’t Ask, Don’t Tell” repeal. 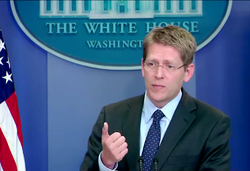 Q    Back in 2008, during the debate over Proposition 8 in California, both sides of the debate utilized various elements of what they saw as the President’s position on marriage equality in their campaign literature.  North Carolina decided earlier this week that they’re going to be having a marriage amendment on the ballot in May 2012.  When asked for a comment on it, the White House only talked about the fact that the President has long opposed similar measures in the past.  Does the White House have a position on the North Carolina amendment specifically?

Q    As a follow-up, does the President have any plans to, in any way, memorialize the end of “don’t ask, don’t tell” on September 20th?

MR. CARNEY:  I don’t have a scheduling update for you on that.

“The President has long believed that gay and lesbian couples deserve the same rights and legal protections as straight couples. That’s why he has called for repeal of the so-called “Defense of Marriage Act” and determined that his Administration would no longer defend the constitutionality of DOMA in the courts. He has also said that the states should determine for themselves how best to uphold the rights of their own citizens.

“While the President does not weigh in on every single action taken by legislative bodies in our country, the record is clear that the President has long opposed divisive and discriminatory efforts to deny rights and benefits to same sex couples. The President believes strongly in stopping laws designed to take rights away.”