‘There were no [gay] men not wearing dresses in show business,” says Jason Stuart, referring to Hollywood 20 years ago when he first contemplated coming out. ”There was a lot of drag stuff but there were no guys [just] being funny.”

”Even now,” the actor and comedian says, ”I’m in a very small group of people.” You can basically count the number of popular non-drag gay comedians and actors on two hands. 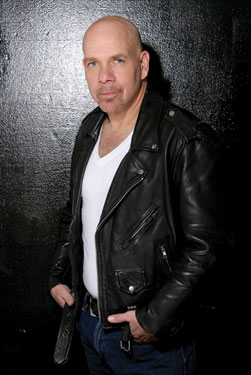 Stuart is doing what he can to help change the situation. He’s the first-ever chair of the National LGBT Actors Committee for the Screen Actors Guild. The committee exists, says Stuart, ”to create opportunities for openly gay actors to be treated as equals and to create more work for each other, so we can play all types of roles.”

To a certain degree, it’s working — at least in Stuart’s case. The frequent TV and film supporting actor — ”I’m a supporting guy, that’s what I do” — has just been cast to play a straight boss in a horror film called Guest House, and he’s recently played a homophobic Bernie Madoff-type prisoner in an MTV series. He even played a straight detective on a recent episode of America’s Most Wanted.

Playing straight isn’t a stretch. ”I pretended to be straight for the first 25 years of my life,” he says, “so it isn’t that hard.”

Still, as an actor, Stuart is best known for playing gay. His career was kicked into high gear a decade ago, when he had a recurring role as a gay shrink on ABC’s My Wife & Kids with Damon Wayans. More recently, he’s been seen on The Closer, Entourage and It’s Always Sunny in Philadelphia. He’s also set to appear in Bear City 2, the sequel to last year’s popular gay film. And he’s co-writing the script to a feature about gay bullying, Broken Dishes, in which he’ll play a bullied kid’s gay teacher.
Ultimately, Stuart got his start in show business as a standup comic. He’ll return to his roots — and to D.C. — next weekend at the city’s newest comedy club, Riot Act, owned by his friend John Xereas.

Born in New York but raised in Los Angeles, Stuart’s comedy career was entirely accidental. “I always wanted to be this wonderful actor,” he says. “The next Dustin Hoffman.” But his first manager encouraged him to try standup. ”I went up at the Comedy Club [in L.A.],” he says, ”and my whole life flashed before my eyes. I was so nervous, I was funny.” And he was hooked.

Soon enough, he realized the need to come out. ”It’s more important for me to be who I am than for me to be in show business,” he reasoned. At that point, in 1993, openly gay comic pioneers Kate Clinton, Lea DeLaria and Bob Smith were already out, but it would still be a few years before Ellen DeGeneres and Rosie O’Donnell came out to huge public fanfare.

Stuart decided to come out on the sensational talk show The Geraldo Rivera Show, as part of an episode devoted to ”Unconventional Comedians.” ”[Geraldo] was terrific,” says Stuart, even after he kissed the host at show’s end. ”But there were people in the audience that were very anti-gay.” In particular, Stuart remembers a Shelly Winters-look-alike who was so worried that Stuart was going to rub her nose in his homosexuality, she refused to talk to him.

Stuart jokes he wouldn’t hurt anyone, much less someone straight. ”As I always say, I love straight people. I have two that clean my house. They’re nice people.”