At the White House Veterans Day Breakfast, One More Sign of a Post-DADT America

This morning, Veterans Affairs Secretary Ric Shineski and his wife hosted a breakfast in the East Room of the White House in honor of Veterans Day, along with President Obama and his wife, Michelle. Among those attending: Mike Almy, a veteran kicked out of the Air Force in 2006 under “Don’t Ask, Don’t Tell.” 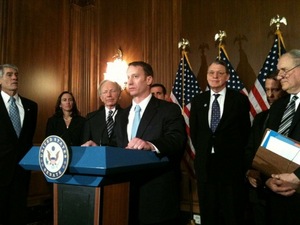 Almy didn’t attend the breakfast as a representative of any DADT repeal-oriented organization, although his activism — and ongoing lawsuit to return to the military — certainly make him one of the many human symbols of repeal efforts. He was there, as the other guests, as a veteran.

Among those attending from the administration, Almy told Metro Weekly this afternoon, were Defense Secretary Leon Panetta, as well as several of the service chiefs or their representatives. Among the veterans attending were some World War II veterans as well as some younger veterans who had served in Iraq and Afghanistan.

From what Almy could tell, he was the only veteran there who had been involved with DADT repeal.

“The president didn’t expressly mention ‘Don’t Ask, Don’t Tell’ or gay servicemembers in any of his remarks, but what is really cool is that after breakfast we went through the receiving line at the White House with both the president and Michelle,” Almy tells Metro Weekly. “When they introduced me to the president, I leaned over and shook his hand and I said, ‘Mr. President, it looks like I will be the first person to go back on active duty following repeal of ‘Don’t Ask, Don’t Tell,’ and his face just lit up and he gave me a big hug after I told him that.”

Although others have rejoined the reserves or National Guard, Almy said that he believes he would the first to return to active duty in the U.S. Armed Forces.

Almy has likened his attendance at this morning’s breakfast to the attendance of same-sex couples raising children at the annual White House Easter Egg Roll, talking about how his presence as a gay veteran was more incidental as one of the approximately 150 attendees at the breakfast.

Almy remains technically at odds with the administration as one of the plaintiffs in a lawsuit brought by Servicemembers Legal Defense Network and filed before the repeal of DADT to return him and two others discharged under DADT to active duty. Almy says that he’s done all of the paperwork to return, has his security clearance finished and only is yet to have his medical clearance completed.

“Once they have the medical clearance done, then they sumbit all the paperwork, and we just wait for the official word back down from the Air Force,” he says. “I could know something by the end of this month, and then, potentially, have a commissioning ceremony within the next month or two.”

At that point, he says, he would drop his lawsuit.

For today, however, Almy says of his attendance at this morning’s breakfast, “It’s just one more indication of how far we’ve come and how inclusive this White House is trying to be and has been so far.”

[Photo: Mike Almy speaks on the day the Senate voted for the Don’t Ask, Don’t Tell Repeal Act at a news conference held Dec. 18, 2010, by LGBT advocates of repeal and Senate leaders. (Photo by Chris Geidner.)]