D.C.'s leather community is busting out for Mid-Atlantic Leather's weekend of kinky camaraderie

If you’ve picked up the scent of leather, it’s not coming from the reins of a horse-drawn carriage – at least not till D.C. gets a serious amount of snow. That heady vapor is coming from the leatherfolk decked out in chaps, uniforms, harnesses, vests and all the rest that brand them a member of the tribe.

Of course, as the Centaur Motorcycle Club’s Mid-Atlantic Leather (MAL) weekend – now marking its 28th year – has evolved, so have the fetishes of attendees. That man in formal leather might be joined by another in a wrestling singlet or motocross gear. Having less to do with the flavor of the affair is the practical matter of the site, the Hyatt Regency Washington on Capitol Hill, where the Centaurs last year set up shop after years at Thomas Circle’s Washington Plaza Hotel. Unlike last year, however, this year the entirety of the Hyatt is dedicated to the leather weekend. The larger hotel – about 800 rooms, compared to 350 at the Plaza – presents some opportunities beyond size alone, says the Centaurs’ Patrick Grady, chair of the weekend. 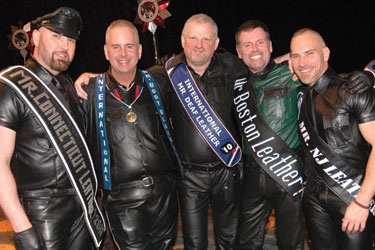 ”A larger hotel allows for almost all but the Reaction dance,” says Grady, pointing to some of the on-site happenings from Friday, Jan. 13, through Monday, Jan. 16. Onyx, ”an organization of Men of Color who enjoy the leather lifestyle,” will have a larger space than in years past. The Mid-Atlantic Uniform League (MAUL), celebrating its fifth anniversary, will hold a special cocktail party at the hotel Saturday night. From Sunday brunch to the Mr. Mid-Atlantic Leather 2012 contest, almost everything is under one roof.

”We have more exhibit space, more variety of guest rooms,” Grady says, adding that a major chain such as Hyatt also allows attendees to cash in or rack up those corporate loyalty points.

So while the 2012 MAL tagline might be ”Out of the Darkness,” it could be followed by, ”and into the Hyatt.” Still, along with the Reaction dance Sunday night off-site at the 9:30 Club, there’s also an unaffiliated Blowoff Saturday night, also at the 9:30 Club. And on the eve of the weekend, Thursday night, the DC Eagle is the site of a bar night celebrating all of those who’ve held the title of Mr. MAL. The MAL Bar Crawl Bus will also see to it that a good dose of MAL energy is unleashed upon the city.

With the weekend ready to explode, Grady does have one minor advisement he’d like MAL enthusiasts to think about for next year: Due to Inauguration Day, Sunday, Jan. 20, 2013, the Centaurs are moving MAL leather weekend ahead a week, Jan. 11 to 13, 2012, rather than during the traditional long weekend that includes Martin Luther King Jr. Day.