By John Riley on February 22, 2012 @JohnAndresRiley

The Maryland Senate has postponed debate over a bill to bring marriage equality to the Free State, allowing opponents extra time to determine a strategy and draft amendments to the bill in hopes of postponing its passage in the upper chamber.

The bill, HB 438, passed the House of Delegates on a narrow 72-67 vote last Friday and passed out of the Senate Judicial Proceedings Committee Tuesday by a margin of 7-4. All three Republicans on the committee, and Sen. Norman Stone, Jr. (D-Baltimore Co.), a longtime opponent of marriage equality, voted against the bill. 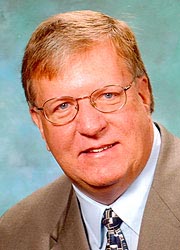 Senate Minority Whip Edward Reilly (R-Anne Arundel Co.) offered an amendment that would change the date when the bill takes effect from Jan. 1, 2013 to October 1, 2012. If such a change was adopted, it would force the bill, once passed by the Senate, to go back to the House.

The bill’s advocates would rather avoid a second House vote because of the close margin of victory, as well as fears that they might lose delegates on the issue. Two delegates, A. Wade Kach (R-Carroll, Baltimore counties) and Tiffany Alston (D-Prince George’s Co.) voted in favor of it after amendments were adopted changing the effective date to Jan. 1, 2013; making the bill not severable, meaning if one part is found unconstitutional, the whole bill will be found to be; and preventing any same-sex marriages from occurring before litigation surrounding the referendum process has concluded.

Reilly also asked Senate President Thomas V. “Mike” Miller (D-Calvert, Prince George’s counties) to “lay over” the bill by delaying debate until Thursday. Under the rules of the Maryland Senate, a senator may make a motion to postpone the consideration of a bill with pending amendments for one day or one hour, but only one senator can ask the bill to be laid over one time. Miller agreed to allow the bill to be laid over until Thursday, Feb. 23.

The delay allows opponents of the bill to regroup and consider a strategy by which they would offer multiple amendments in an attempt to derail the bill or make its progress through the legislature more difficult. But Sen. Rich Madaleno (D-Montgomery Co.), the state’s only openly gay senator, told Metro Weekly on Tuesday that such procedural moves were expected from opponents.

However, Madaleno said he was confident supporters of the bill would be able to defeat the amendments and pass the measure by the end of the week. No senator who voted for last year’s marriage equality bill, which passed 25-21, has indicated they are considering switching their vote, meaning eventual passage is expected. If passed by the Senate, Gov. Martin O’Malley (D) has vowed to sign it into law.