Parents of students at Kensington’s Albert Einstein High School got a surprise along with their children’s report cards, Feb 1. 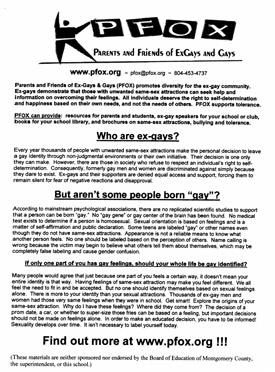 But last Wednesday students received fliers from Parents and Friends of Ex-Gays (PFOX) to take home to share with their parents.

The PFOX handbills advised there is no scientific evidence of sexual orientation being innate; that people can choose to be heterosexual; and encouraged readers to contact PFOX and like-minded groups.

According to David Fishback of the Washington area chapter of Parents, Families and Friends of Lesbians and Gays (PFLAG), PFOX has previously distributed fliers at Winston Churchill High School in Potomac, Montgomery Blair High School in Silver Spring, and Bethesda-Chevy Chase High School and Walt Whitman High School in Bethesda.

According to Dana Tofig, a spokesman for Montgomery County Public Schools (MCPS), the school system must allow any nonprofit that can prove it is a registered 501(c)3 to send home fliers with students. That requirement stems from a U.S. Court of Appeals for the Fourth Circuit ruling that Montgomery County’s refusal to allow an evangelical Christian organization to send home fliers constituted viewpoint discrimination.

As a result, the county established specific criteria for nonprofits by which they are allowed to participate in the flier distribution program. The fliers from nonprofits must also include a disclaimer that reads, ”These materials are neither sponsored by nor endorsed by the Board of Education of Montgomery County, the superintendent, or this school.”

Fishback argues, however, that PFOX can be considered harmful to LGBT youth because of the group’s emphasis on reparative therapy, which the American Medical Association opposes.

”Any discussion of PFOX should include what has been its prime focus from its inception: convincing gay people that they can change their sexual orientation,” Fishback said in a related PFLAG release. ”This message is dangerous and destructive to health.”

Fishback also told Metro Weekly that promoting the idea of ”assumed willful differences” – that gay people can choose to be straight – contributes to atmospheres that are conducive to bullying, which, in turn, can lead teenagers to consider suicide.