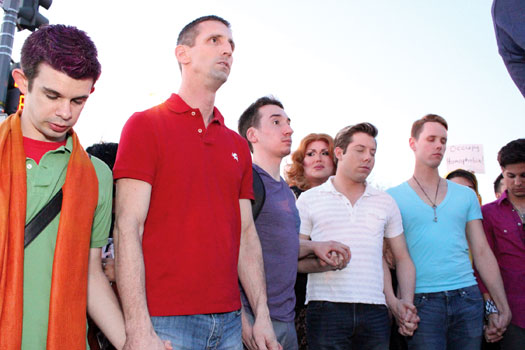 Protesters, including Rodney Shaffer (second from left, in red), stand in silence

Hundreds of D.C. residents took to the streets on Tuesday, March 20, to protest several recent crimes that targeted LGBT victims in various wards across the city in a 3-mile march that covered several neighborhoods, including Columbia Heights, Park View, the U Street corridor and Dupont Circle.

The march, organized by Patrick Pressman after his friend was beaten and robbed on Georgia Avenue NW between Irving and Morton Streets March 12, was intended to be a show of support for Pressman’s friend, as well as for another gay victim who was shot in the abdomen following an altercation at an IHOP restaurant in the 3100 block of 14th Street NW in the early morning hours of March 11.

Pressman told Metro Weekly after posting the plan on Facebook March 15 that he expected about 20 close friends to attend. But the group, ”Silent March for Victims of GLBT Violence,” took on a life of its own as attendees invited hundreds of friends, with the Facebook group topping 700 members by the day of the march.

Councilmembers Jim Graham (D-Ward 1), in whose ward the attacks occurred, Muriel Bowser (D-Ward 4), Michael Brown (I-At Large) and Council Chairman Kwame Brown (D), as well as top brass from the Metropolitan Police Department, including Chief Cathy Lanier, spoke at the event, which drew hundreds to the march’s designated starting place near the IHOP Restaurant in Columbia Heights, where the March 11 shooting had taken place.

Event organizers told Metro Weekly that they estimated the size of the crowd to have been more than 800 people, including a number of people from the ”Occupy” movement who also took part in the demonstration.

Escorted by officers from MPD, the marchers walked down Irving Street NW to the corner of Georgia Avenue where A.J. Singletary, chair of the group Gays and Lesbians Opposing Violence (GLOV), read aloud a description of what had happened to Pressman’s friend at that intersection as the marchers stood in silence.

Organizers of the march had encouraged members of the Facebook group to wear solid-colored shirts in hues of the rainbow. Some people wore duct tape over their mouths as they marched. Others wore signs that stated their relationship to victims of hate crimes: ”brother,” ”sister,” ”friend.” Still others carried multicolored signs protesting the recent hate crimes directed against members of the LGBT community. A number of people wore rainbow ”gay pride” colored flags, towels and one person carried a rainbow-colored umbrella.

As the colorful crowd made its way along the route, several passerby stared and asked what the people were protesting. Some observers showed signs of support by honking their horns, giving ”thumbs up” signs to the marchers or shouting messages of support as the marchers passed. The march ended at the intersection of R and 17th Streets NW, in front of Cobalt nightclub, where a fundraiser was held to help the victim from the Georgia Avenue beating – who required surgery for a broken jaw – pay his bills and medical expenses.

Later, the man’s partner, Rodney Shaffer, said he was grateful at the show of support from the community.

”It was amazing watching it develop,” Shaffer said of the event’s rapid growth and expansion.

”The march had to have had an impact,” Shaffer said. ”There are too many people through that neighborhood that don’t normally see those people there, and the fact that we took up half the street. So, everybody’s going to be asking about it, in case they didn’t already know.”

Shaffer said he believes the solution to stopping or solving crimes like the one committed against his partner is having people be willing to come forward and give police the information necessary to catch those responsible for such crimes.

Several of the event attendees expressed frustration at the seeming rise in anti-LGBT attacks and said the march provided them a needed outlet to express their concerns.

”I think this is truly the straw that broke the camel’s back,” said Binaca, a local drag entertainer. ”I know it sounds cliché, but enough is enough already. It’s 2012. We have got to be able to say, ‘Enough is enough. We’re not taking this any longer.’ The police have got to back us up, they’ve got to be patrolling. I’ve lived here nine years, and I’ve never, in my memory, seen it this bad before. I personally am done with it. … I encourage everyone else to assert themselves. Be alert. Be proud. And just make sure you know where you are at all times.”

John Riley is the local news reporter for Metro Weekly. He can be reached at jriley@metroweekly.com
← Previous Story Chamber Announces Awardees
Next Story → National Briefs: Accountability and Accommodation