Michelle Obama: Supreme Court Picks Will Impact Whether Americans Can “Love Whomever We Choose”

At multiple events in New York City on Monday, March 19, First Lady Michelle Obama — in campaigning for her husband’s re-election — made reference to the effect that Supreme Court appointees will have on “whether we can … love whomever we choose.” 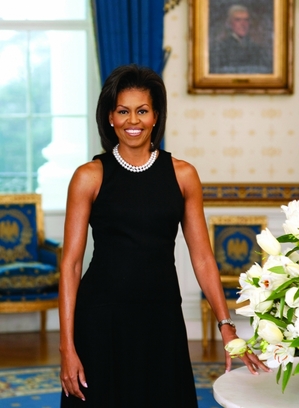 Although she did not explicitly mention marriage equality, the possibility of a case raising that issue reaching the Supreme Court has been a regular topic of discussion — particularly in light of the challenge to California’s marriage amendment, Proposition 8, that is currently being considered by the U.S. Court of Appeals for the Ninth Circuit.

[UPDATE @ 3P: Today at the White House press briefing, in response to a question from Metro Weekly, White House press secretary Jay Carney said of the first lady’s comments, “She has said this before and has for some time, and that is a reference to the president’s position on the Defense of Marriage Act.”

Continuing, he added: “The president and first lady firmly believe that gay and lesbian Americans and their families deserve legal protections and the ability to thrive just like any family does. The first lady has said she is proud of his accomplishments, including the repeal of ‘Don’t Ask, Don’t Tell,’ ensuring hospital visitation rights and calling for the repeal of DOMA and obviously our actions on DOMA. And our decision not to defend DOMA is well known.”]

At Locanda Verde restaurant on Greenwich Street in TriBeCa, the first lady spoke for nearly 30 minutes at an event hosted by Robert de Niro and his wife Grace Hightower. To a crowd of about 85 people contributing a minimum of $5,000 to the Obama Victory Fund that benefits the campaign and the Democratic National Committee, she discussed the president’s accomplishments unsurprisingly in glowing terms.

Raising the Supreme Court, according to a White House transcript, she said, “[L]et us not forget about what it meant when my husband appointed those two magnificent Supreme Court justices. And for the first time in history, our daughters and our sons watched three women take their seat on our nation’s highest court.

She then added, “And let us not forget what their decisions — the impact those decisions will have on our lives for decades to come -– on our privacy and security, on whether we can speak freely, worship openly, and, yes, love whomever we choose” — a line that prompted applause.

“But that’s what’s at stake,” she concluded in that section of her speech. “That’s the choice that we face.”

President Obama did not support marriage equality in his 2008 campaign and, according to his White House spokesman, Jay Carney, has not changed his position from the “evolving” point he told bloggers and reporters that he was at on the issue toward the end of 2010. The president, however, told his Justice Department more than a year ago that he believes the federal definition of marriage — which limits marriage to one man and one woman — is unconstitutional and has directed the DOJ to stop defending the law in court challenges, which it has done.

If there was any doubt whether the first lady’s comments at the de Niro event were an off-the-cuff addition, she had made similar comments — but with a focus on children — to about 400 supporters who paid $150 each to attend an event at the Chelsea Piers bowling lanes earlier in the day on Monday.

Stating much of the same background on the court appointments that she would later give at the de Niro event, she then said, according to a White House transcript, “But more importantly, let’s not forget the impact their decisions will have on our children’s lives for decades to come — on their privacy and security; on whether they can speak freely, worship openly, and love whomever they choose.”

The first lady’s communications director, Kristina Schake, was a founding board member of the organization backing the challenge to Proposition 8, the American Foundation for Equal Rights. Schake’s former business partner, Chad Griffin, is the board president of AFER and recently was announced as the next president of the Human Rights Campaign. At the State Dinner held in honor of the official visit by British Prime Minister Davd Cameron this past week, Griffin and his date sat at the president and first lady’s table.

UPDATE @ 9A: Of the first lady’s remarks, Evan Wolfson, president and founder of Freedom to Marry, told Metro Weekly: “With several freedom to marry cases potentially reaching the Supreme Court in the next year or two, the First Lady is absolutely right that we need to do everything we can to maximize our chances of winning there.”

He added: “Who sits on the Court makes a big difference, as does the momentum for marriage we build to create the climate around the Court, which matters as much or more as the briefs we file. That’s why we must urgently work to win more states and continue moving hearts and minds — and why we need our leaders to join us all in making the case as effectively in the court of public opinion as our advocates do in the court of law.”