Was Saint Sebastian gay? History is actually iffy on the subject. But the celebrated, martyred Christian is sometimes referred to as ”a homosexual icon,” in large part because he helped foster paintings of male nudes (featuring subjects other than Jesus). Yet since the Renaissance, the proclaimed patron saint of soldiers and athletes has inspired many artists, straight and gay, to create works of stunning beauty.

”There’s a lot of symbolism definitely for gays in Saint Sebastian,” says Stan Engebretson, who will conduct the National Philharmonic in a performance of Claude Debussy’s The Martyrdom of Saint Sebastian this Saturday, May 19. The 100-year-old oratorio, written with Italian poet Gabriele d’Annunzio, goes through key stages in Sebastian’s life, from his days as a soldier to the day he was ordered killed by having soldiers pummel his naked body with arrows. It ends with Sebastian’s ascent to ”paradise.” 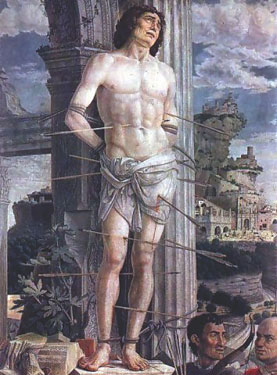 Somewhat surprisingly, the philharmonic’s performance — the closing concert in a series celebrating the famous French composer — is actually the Washington-area premiere of the 100-year-old piece. ”It’s a production that takes 250 people onstage, so it’s not one that you’d commonly run into,” explains Engebretson, artistic director of the National Philharmonic Chorale. The chorale’s 170 members will be joined by an 80-piece orchestra, three female soloists and a narrator – namely Eliot Pfanstiehl, founder and CEO of Strathmore.

”I think it’s just one of those pieces that have sort of been forgotten,” Engebretson says. ”But the music is absolutely rapturous. It’s Debussy at his most beautiful.” ‘